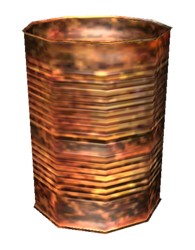 Tin cans are sealed metal containers used to hold and preserve perishable food, such as Pork n' Beans. Their airtight seal allows food to keep for years, though all tin cans found are open, empty, and unlabeled. In-game, they are typically found either in places where food is or was once sold, such as grocery stores and gas stations or alongside camping grounds and hideouts.

Retrieved from "https://fallout.fandom.com/wiki/Tin_can_(Fallout_3)?oldid=3470680"
Community content is available under CC-BY-SA unless otherwise noted.