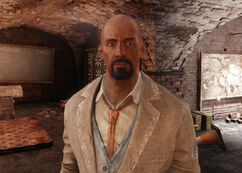 Mister Tims is an agent of the Railroad living in the Commonwealth in 2287.

Head of the Randolph Safehouse, Mister Tims is an excellent caretaker who rivals Deacon in terms of paranoia and effectiveness.

During the events of Tactical Thinking, Tims is moved outside of the playable area in the Railroad HQ, but not disabled. This makes it possible to hear passive combat dialogue from him as one is engaged in combat with the Railroad.

Tims appears only in Fallout 4.

Retrieved from "https://fallout.fandom.com/wiki/Tims?oldid=3224037"
Community content is available under CC-BY-SA unless otherwise noted.