HairChildMShort01
“It's okay, I guess. I don't really have nobody to play with. Except for Betty... and she's kind of... well, she's mean.”

Timmy Neusbaum is one of the residents of Vault 112. He can be met in the Tranquility Lane simulation in 2277.

Bill Foster describes him as what he called a "momma's boy" back in his day.

Timmy Neusbaum appears only in Fallout 3.

Timmy as a gnome

Timmy at his lemonade stand 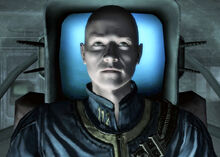 Timmy in the Tranquility lounger