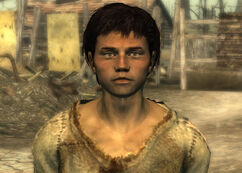 “You do actually know how to plant mines, right?”

Timebomb is a badly injured man in Red's clinic in Big Town in 2277.

Currently laid out in a coma in the operating room of Red's clinic, Timebomb was severely wounded during the last super mutant attack, when Red and Shorty were kidnapped. He is known as Timebomb due to his mood swings; he has prolonged periods of calm before instigating big disturbances.[1]

Timebomb, like every other inhabitant of Big Town, came from Little Lamplight. If the player character speaks to Bittercup, she will say she had a relationship with Timebomb. If Timebomb is spoken to about this, he will have no recollection of it, implying she may have "had a relationship" with him while he was unconscious and alludes to Bittercup's fascination with death.

Timebomb appears only in Fallout 3.

Despite being in a coma, he will talk and clap his hands when lying unconscious on the gurney.[verified]

Retrieved from "https://fallout.fandom.com/wiki/Timebomb?oldid=3267621"
Community content is available under CC-BY-SA unless otherwise noted.