Time to Wake Up!

“Someone made the mistake of activating a Wakemaster prototype alarm clock in a building not far from the Vault. Now the alarm is blaring non-stop and it's keeping everyone up!”

Time to Wake Up! is a single-stage overseer quest in Fallout Shelter.

The top floor has a friendly raider you can speak to. The first dialogue option yields caps and the room contains a random rare weapon. To the right of the raider is a room with three radroaches. The elevator to the right reaches down to the right side of the sixth and fifth floors, though there is only one room to explore, which has three more radroaches. 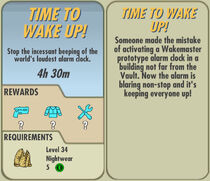 Rewards
Add a photo to this gallery
Retrieved from "https://fallout.fandom.com/wiki/Time_to_Wake_Up!?oldid=3177138"
Community content is available under CC-BY-SA unless otherwise noted.