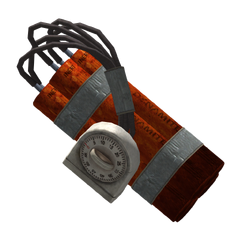 The high yield time bomb is a more powerful version of the improvised Explosives weapon. It is a placed explosive, and as such cannot be thrown like a grenade or used in V.A.T.S. Unlike a proximity mine, once activated, it will automatically detonate after 15 seconds.

This weapon must be crafted by the player character. It cannot be found on enemies or in containers.

Like its base variant, this weapon is not affected by the Cowboy perk, despite technically consisting of dynamite.