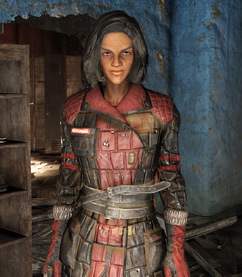 Tiffany Brantley is a Fire Breathers initiate residing in Appalachia in 2103.

Tiffany can be found at the Charleston Fire Department studying for the Fire Breathers knowledge exam. She previously completed the fitness exam with ease, but is having trouble with the knowledge exam, and refuses to cheat by allowing an intelligent Vault Dweller give her answers or using Mentats to get an edge. She is very enthusiastic about becoming a Fire Breather and fighting the Scorched, claiming that it is her duty to do so.

An intelligent player character (4+) can attempt to help Tiffany through the knowledge exam by giving her the answers. She will refuse, stating that if she will be out in the wasteland helping others, it will be necessary for her to actually know and understand what she is doing, but will give the player character 24 10mm rounds.

Tiffany Brantley appears only in Fallout 76, introduced in the Wastelanders update.

Judging from the filenames in the dialogue file, Tiffany Brantley was originally Jason Brantley, a male, and can still be found referred to as male in the script notes.

Retrieved from "https://fallout.fandom.com/wiki/Tiffany_Brantley?oldid=3465293"
Community content is available under CC-BY-SA unless otherwise noted.