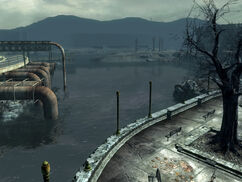 The Tidal Basin is a partially man-made reservoir found in the Capital Wasteland.

Before the Great War, it was a productive port for fishing and boating with the Jefferson Memorial in its center. When the bombs fell, mirelurks began colonizing it, soon infesting the water. The basin is filled with many row boats, tugboats, and dinghies. Many boxes of loot are still aboard the half-sunken and dilapidated boats that mar in the shallows of the district's port basin.

Its surrounding territory was being fought over by the Brotherhood of Steel, the Enclave, and the super mutant hordes that occupied downtown Washington, D.C.. In 2277 the Brotherhood seized it and gained control of Project Purity. The Tidal Basin can be infected with the modified FEV if the Lone Wanderer chose to do so during Project Impurity.

The Tidal Basin appears only in Fallout 3.

Retrieved from "https://fallout.fandom.com/wiki/Tidal_Basin?oldid=3247841"
Community content is available under CC-BY-SA unless otherwise noted.