Ticks are creatures found in Appalachia.

Following the Great War, these ticks mutated from the Ixodes scapularis variant.[1] Scout Leader Jaggy shares advice about ticks, in that if one spends time in the forest, at the end of the day, they should thoroughly check for ticks.[2]

Ticks are fast-moving and emit a unique clattering sound when moving. After attacking, their blood sacs will fill with blood, which they can spray back at their opponent to cause radiation damage for several seconds. If killed, their sacs will explode, rendering them unable to be looted for tick blood and tick blood sacs. Diseased ticks also have a chance to give the parasites disease.

The standard variant, with the attributes mentioned above.

The second strongest variant. It is a dark black and red color, with a pattern on the abdomen.

The most dangerous variant. Its abdomen glows a bright orange.

The glowing variant is equal to the vile tick in terms of damage.

This tick is infected with the Scorched Plague. All regular tick variants have a corresponding Scorched variant with the same stats, abilities, and items. They may become Scorched when attacked by scorchbeasts or the scorchbeast queen, becoming allies with other Scorched creatures.

Ticks appear in Fallout 76 and are mentioned in Fallout: New Vegas and the Fallout 4 add-on Nuka-World.

The mutated tick is based on the real world Ixodes scapularis deer tick. 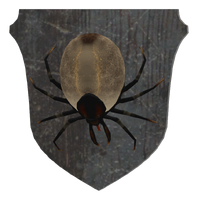