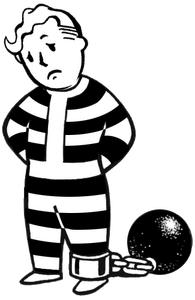 Tibbets is a cold, sterile, steel-walled automated prison facility in what used to be known as Arizona, run by technology so ancient it dates back to the years before the Great War - nearly two hundred years before Van Buren's events. It is a facility designed to hold and protect some of the world's most dangerous criminals (military and otherwise) before the war. It is governed by the split-personality machine intelligence within the prison, ODYSSEUS (ULYSSES).

Tibbets was always a military prison, holding some of the United States' most dangerous criminals. Over time, the prison became more advanced, utilizing robotic wardens and utility robots to maintain the structure, especially as the war with China in the 2070s and the annexation of Canada began to drain personnel from the United States. It was designed to hold 636 prisoners at full capacity. As of 2253, it holds much more than that - but when the dust and ash settles after the catastrophic attack at the prison, there will be enough prisoners running from the shattered prison walls to pose a threat to the wasteland.

It was used as primitive isolation studies before the vaults were established, except the subjects were prisoners, especially CODE'd to see if they could withstand the rigors of isolation for protracted periods of time. This was the time when the recycling systems and water purification systems were tested before using them in the Safehouse Project - any prisoners harmed during the procedure were tended to - not dystopian style.

In 2040, it was commandeered by the United States government in association with Vault-Tec and Poseidon Oil to tie into their Safehouse Project.

Before the Great War[edit | edit source]

The United States Penitentiary (USP), Tibbets is located on 1,583 square acres with 22.8 inside the penitentiary walls. It is an all-male high-security level facility committed to carrying out the judgments of the Federal Courts. It provides a safe, secure and humane environment for those offenders committed to its custody. Like all Bureau facilities, Tibbets adheres to a balanced philosophy that recognizes that punishment, deterrence, and incapacitation are all valid purposes of confinement. Opportunities for positive change are provided through work, education, training, and counseling for inmates motivated toward self-improvement.

The USP Tibbets came into existence through an act of Congress in 1895. Inmates from the military prison at Fort Tibbets were used in the early construction and were marched 3 ½ miles to the site daily, returning to the prison at the Fort at night. This continued until February 1903 when the first 418 inmates to occupy the prison site were moved into what now serves as a laundry building. Prisoners and supplies for the prison were handled via a rail line that passed through the prison to unload and load cargo.

In 1906, all federal prisoners from Fort Tibbets were housed in the new institution and the prison at Fort Tibbets was returned to the War Department. A milestone in the new penitentiaries' construction was reached in 1926 with the final placement of the dome overhead the rotunda - from which the penitentiary derives its famous nickname - "The Big Top".

On April 5, 2040, the Secretary of the Army made the decision to build a new Disciplinary Barracks, with a capacity for 456 inmates. A cost ceiling of $363 million in allocated construction dollars was set. The target budget year for funding this project was the fiscal year 2041. Construction began in the Fall of 2042, with completion projected for the fall of 2045.

In July 2042, discussions with Vault-Tec to determine space and functional requirements for the new facility. On 6 September 2042, the Combined Arms Center Commander was given a decision brief of the USDB project and selected one of three design options for further development. He also requested the Corps of Engineers to research an alternate location for the placement of this facility, since the geological evaluation of the site adjacent to the Trustee Unit revealed unsuitable subsurface conditions. Discussions involving the possible movement of the prison and relocation projects were also discussed, leading to the three-rail system that exists today.

Shortly before the Great War, Tibbets housed war criminals/deserters who had been exposed to biological weapons or radiation in Denver or in the Yangtze Campaign. Even though ODYSSEUS was retrofitted for maintaining the prison and monitoring the prisoners, he still retained an inordinate amount of security clearance. Other than prisoners, no humans were present at Tibbets. ODYSSEUS commanded the all-robot staff, including the seldom-roused ARGOS, who served as the tireless defender of the prison. The government wanted ODYSSEUS to be able to "advise" on the spread of plague vectors in the case of a prison break. This included warming up launch sites like B.O.M.B.-001.

After the Great War[edit | edit source]

Victor and his followers released the New Plague virus in the remote areas near Boulder and Denver. It was close enough to the quarantine prison to spur ODYSSEUS into action, but not near enough to huge populations to start a general panic. Due to its pre-War programming, ODYSSEUS would track and arrest all infected people. ODYSSEUS was far too secure for Presper to hack, so the only way he could get ODYSSEUS to send the launch codes to BOMB was to lead ODYSSEUS to the conclusion that too much of an area had been infected to be conventionally contained. In order to achieve that, Presper’s men would stage an attack on the prison which would allow everyone to escape. This event would start a countdown of sorts for missile launch on B.O.M.B.-001. ODYSSEUS would assess the viral spread, try to gather up the escaped prisoners, and once 90% of the prisoners had been retrieved, launch nuclear missiles to "clean & prevent" any further infection.

Repeated attacks from eye-bots revealed to the Prisoner what ODYSSEUS' goal is, which is to continue to send out robots after the prisoners until they all have been brought back to the prison. The eye-bots and ARGOS got everyone pretty quickly - other than the protagonist and six other prisoners (Blackjack, Daniel, Chagas, Mallet McBride, Ginger Flowers and Jillian McKinley). It became obvious pretty quickly that ODYSSEUS is checking dudes off as they return and keeps telling the robots that X more prisoners are unaccounted for, but ODYSSEUS seemed to be unconcerned with prisoners that stream back out again after being captured.

Tibbets provides academic, work and occupational education opportunities to all inmates who wish or who are required to participate in them. It also provides a full range of recreation and leisure time activities.

Tibbets offers a wide range of education programs from basic literacy to high school equivalency (GED) to parenting programs through the Personal Information Processor issued to each inmate. The Bureau utilizes the high school equivalency as its literacy standard and inmates failing to meet this standard are required to participate in education programs. In addition, the Education Department offers English as a Second Language and bi-lingual Adult Basic and Secondary Education opportunity.

Health Services provides a full range of outpatient and infirmary care to all inmates. There are 26 full-time medical staff members, including two physicians, two dentists, two pharmacists, nine physician assistants, two health information personnel, an administrator, and an assistant administrator. The automated medical staff includes six Auto-Doc systems and a number of on-call medical robots. This staff provides 24-hour coverage and specialty services are provided by consultants from the community. Four hospitals in the local area offer inpatient and outpatient care on a contractual basis.

USP Tibbets provides a residential treatment program to those inmates interested in making pro-social life decisions and uses the latest in psychological methods and technology. The Challenge, Opportunity, Discipline, and Ethics (CODE) program is a year-long residential treatment program offered in the prison. The mission of the program is to foster a sense of trust, responsibility, integrity, and tolerance. Inmates enrolled in the program spend the first three months exploring the change process, followed by six months of daily treatment methods to promote positive life skills, and during the final three months of the program, inmates develop skills to discourage relapse into prior negative forms of thinking, feeling, and behaving.

Tibbets is self-sufficient. It has a recycling water supply, a waste recycling system that extracts moisture from human waste, and it has several stockpiles of oil, petrol, fusion cells, and electrical batteries to keep it going for at least fifty more years. It has exploited its massive stockpile in ties with Robot City to "beef up" in preparation for its escape.

Relationship with other communities[edit | edit source]

Tibbets has no relationship with any other communities in the Wasteland west of its location - most of them don't know it's even there. The only "communities" that know of its existence are the machine intelligence governing Robot City to the East, which are attempting to find ULYSSES and correct the "divide" that has occurred within its system - and return it to its imprisoned, intended place as their slave.

The Tibbets Facility did not appear in any of the published games, but was to be the starting location in the canceled Fallout 3 project by Black Isle codenamed Van Buren.[1][2]

Retrieved from "https://fallout.fandom.com/wiki/Tibbets_Prison?oldid=3407211"
Community content is available under CC-BY-SA unless otherwise noted.