Outside the Galactic Zone main gate 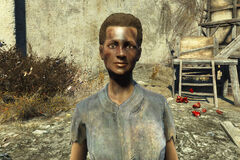 Tiana Alston is a dead wastelander in Nuka-World in 2287. She can be found at one of the three entrances to the Galactic Zone.

Tiana Alston is the daughter of Kendell Alston and a former settler in the Nuka-World park.[citation needed] Prior to the arrival of the Nuka-World raiders, she would accompany her father and his crew into Starport Nuka while they looked for salvage.[citation needed] She mostly enjoyed interacting with and studying the technology in the park, leading to her discovery of Star Control and its functions.[citation needed] The arrival of Colter and his gangs prompted her father to activate it as a means of defense, despite Tiana's warnings that there were not enough star cores gathered to properly control the system's functions, resulting in the robots becoming hostile to everyone in the park.[citation needed] Her log's last entry stated that the surviving settlers would wait until dark to try and escape the park. Her body can be found by the Sole Survivor outside of the gates to Starport Nuka.[citation needed]

The quest will direct the Sole Survivor to one of the battlesites with Tiana. The other sites will then both have 3 traders spawned.

Tiana Alston appears only in the Fallout 4 add-on Nuka-World.

The three possible locations of Tiana

Appearance of Tiana at the southeast entrance

Appearance of Tiana at the north entrance