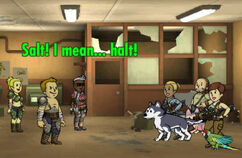 “All right, the Super-Duper Mart was a bust as far as ingredients go. This time, though, we have a sure lead to a cache of spice in a nearby building! And the chef is convinced the Raiders will just hand it over...”

Thyme is Money is an overseer quest and the part of the Food, Glowrious Food multi-stage questline in Fallout Shelter.

The third level has a group of three radroaches, followed by a raider leader and two raiders named Basil and Rosemary. Defeat them to complete the first main objective. Another group of three molerats are in the next room. The elevator goes up and down. If you take the elevator down, the top room has pair of molerats, and the bottom room has three.

The elevator up leads to the top floor, with a pair of raiders in the right room, and in the next room, a trio of raiders who have more spice related puns. Defeating the trio completes the second objective, and rewards you with three nuka-cola quantum. Past these three is another group of three raiders, and the last room has a pair of molerats.

Rewards
Add an image to this gallery
Retrieved from "https://fallout.fandom.com/wiki/Thyme_is_Money?oldid=3037040"
Community content is available under CC-BY-SA unless otherwise noted.