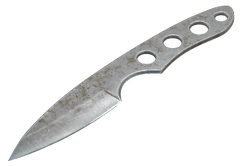 The throwing knife is a melee throwing weapon in Fallout 76.

The throwing knife is a basic thrown weapon available from the beginning of the game. The knife is bare steel with a slight curve and four holes in the grip. When thrown the knife travels in a steep arc and will impact to the left of the crosshair.

Comparatively high damage and ease of crafting make this an excellent choice for any build at low levels. Throwing knives may sometimes be recovered from corpses, but knives that impact the environment do not appear recoverable at this time. Inconsistent hitboxes render the weapon difficult to use in tight indoor spaces.

Unlike other thrown weapons, the throwing knife can be sold to vendors.

Retrieved from "https://fallout.fandom.com/wiki/Throwing_knife_(Fallout_76)?oldid=3208265"
Community content is available under CC-BY-SA unless otherwise noted.