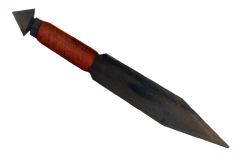 The throwing knife is a weapon in Fallout: New Vegas.

A deadly weapon of choice for assassins, throwing knives are as silent as they are cunning. They are small, light weight, quick, and quiet. They are about seven inches in length and made of lightweight alloy with a handle wrapped in red ribbon.

Since they lack the damage of hatchets and spears, it's recommended to use these with any poisons.