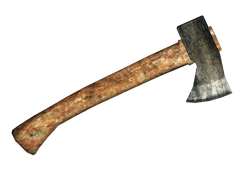 The throwing hatchet is a weapon in Fallout: New Vegas. Differing from standard hatchets, these hatchets have been rebalanced for ranged combat.

Throwing hatchets require a Strength of 1 and a Melee Weapons skill of 25 to be used effectively. Like their non-thrown counterparts, throwing hatchets inflict an additional 50% in Limb Damage and are one of the most damaging thrown weapons, with the exception of explosives.

Hatchet's high damage compared to throwing spears and knives is offset by their greater weight and rarity.

With Old World Blues installed, the damage and critical damage is reduced to 20. [verified]