Honest Hearts
“Heads up, this is the Three Marys. White Legs territory. You sure you want to head in there?”— Follows-Chalk

The Three Marys is a location in Zion Canyon in 2281. It is the location of the White Legs's main camp in the area.

The Three Marys caverns are located along the river past the Three Marys map marker, in the first area with three large rocks, and consist of a cave with two entrances. The first entrance is on a ledge on the southern bank of the river, but can be accessed from the northern bank via a rock bridge.

Going through the cavern and then using the other entrance provides a shortcut past the westernmost bend of the river. There are three White Legs pain makers inside, and sleeping facilities. In the canyon, the ground is heavily littered with trash and debris.[Non-canon 1]

The Three Marys appears only in the Fallout: New Vegas add-on Honest Hearts.

The "Three Marys" is a rock formation in the real-world Zion National Park. 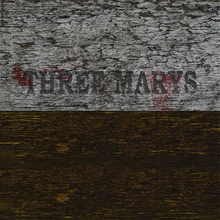