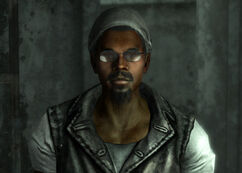 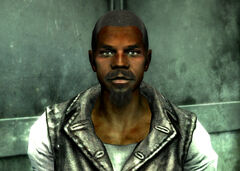 Three Dog without his characteristic headwrap and glasses

“Hey everybody, this is Three Dog, your friendly neighborhood disc jockey. What's a disc? Hell if I know, but I'm gonna keep talking anyway.”

Three Dog is the radio host, DJ, and news anchor of the Galaxy News Radio station in the Capital Wasteland in 2277, playing music that would have been heard on the radio in the years leading up to the Great War, as well as the immediate post-War era.

Born to parents who made their way in the world as members of a traveling theater group, Three Dog grew up listening to rock music, resenting the government that he never knew (but surely caused the Great War) and fully believing in the rights of free speech and communal law. He is fully committed to "spreading the signal" of his radio station to anyone who will listen; it is his duty to counter the propaganda spouted by the Enclave on their station.[1]

At some point, before he discovered D.C.'s primary news radio, he was experimenting with Jet and stumbled across Oasis during his travels in the Capital Wasteland. He established GNR in 2272, together with his technician and assistant Margaret. Since he began, he has been broadcasting to the Wasteland with public service announcements and music. At times he makes jests at Enclave Radio, going as far as mocking President John Henry Eden's voice.

Three-Dog believes in what he calls "fighting the Good Fight," which boils down to any action that opposes and antagonizes the wasteland's various oppressors and thugs, be it raider gangs, bands of super mutants, slaving parties, Talon Company death squads or the Enclave's soldiers. To this end, he actively cooperates with the Brotherhood of Steel, letting them use his fortified radio station as an outpost. However, he avoids direct involvement in the war effort, and instead leaves the defense of the radio station to his Brotherhood entourage. Ironically, one of the radio DJ's friends had entrusted him with a key to a military weapons cache.

Three-Dog has been mentioned by Travis Miles, DJ for Diamond City Radio. After the Sole Survivor defeats the Institute with the help of either the Minutemen, the Brotherhood of Steel or the Railroad, Travis will say that an old friend used to tell him "you have to fight the Good Fight."

By 2287, Three Dog had disappeared from the Capital Wasteland and was considered missing. Phil Goodman, also known as the Ghoul of Cool, took up his role as DJ for a time. Three Dog's legacy continued on in the form of the Good Fighters, who helped defend D.C. and promoted the message of the "Good Fight." An unknown group later hired the Talon Company to assault the GNR building and take it from the Good Fighters. During the quest The Good Fight, the Sole Survivor is tasked with arriving on scene and reclaiming the building.

He stays in the GNR building throughout the entire game.

Three Dog appears in Fallout 3, Fallout Shelter, and is mentioned by Travis Miles as well as Robert MacCready in Fallout 4. He is also mentioned in the Creation Club content "Capital Wasteland Mercenaries."

Three Dog appearing with Good Karma during the ending slides

Retrieved from "https://fallout.fandom.com/wiki/Three_Dog?oldid=3466218"
Community content is available under CC-BY-SA unless otherwise noted.