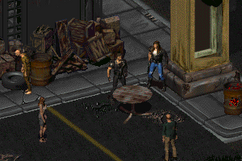 “How did that stupid tribal keep picking the right card?”— To Rico when the Chosen One has cheated

Three-Card Monte is an emaciated old man with a sunburned face.[1] He has set up a crude stall on Virgin Street at which he gambles from. His games are always rigged but if one disagrees with the outcomes they can always take it up with his simple-minded, but loyal, brute of a bodyguard, Rico.

Three-Card Monte was cut from Fallout 2.

Three-Card Monte's name comes from the game that he was set to play with the Chosen One.[2]

Retrieved from "https://fallout.fandom.com/wiki/Three-Card_Monte?oldid=3350747"
Community content is available under CC-BY-SA unless otherwise noted.