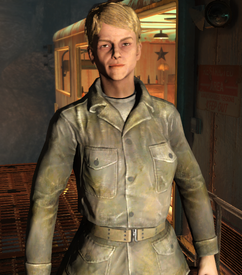 Sergeant Thompson is a former U.S. Army soldier in Appalachia in 2103.

Sergeant Thompson has been fighting under the command of Captain Oliver Fields since the Sino-American War, where she lost three toes to frostbite while her squadmate Sergeant Radcliff only lost one. Thompson specializes as a military dog handler, and was responsible for training and handling a team of military working dogs.[1]

All three were later part of the original team responsible for moving the gold reserves at Fort Knox to Vault 79. However, the Vault closed, and they were left outside when the Great War struck. For years, they wandered, always staying near the region, returning when they heard it was safe enough to return.[2] The three eventually ended up in Pittsburgh, where they unsuccessfully attempted to maintain order. Captain Fields was wounded, and was only saved because Thompson ordered her dogs Angel and Odysseus to defend him. They were able to escape, although Angel lost a front leg in the fighting. Following their failure, the squad considered leaving their military lives behind, but were convinced to keep going after hearing a broadcast from military remnants in Appalachia, and chose to return "home."[1] During their journey, they ended up following and observing the Settlers as they undertook the same trip from the Pitt to Appalachia. Once in Appalachia, the team all agreed to a meeting with the Vault Dweller at the ransacked bunker.[3]

Thompson was responsible for raising and training the squad's military dog, Private Lucky, ever since he was a puppy, and trained him to accept the clicking sound of a Nuka-Cola bottlecap as a positive stimulus.[4] She is also an enthusiastic fan of the Mistress of Mystery, and is eager to talk to others who are in the know.[5]

Thompson appears in Fallout 76, introduced in the Wastelanders update.

Captain Fields, Sergeant Thompson, Sergeant Radcliff, Private Lucky, Odysseus, and Angel are all identified as members of The Old Guard. Their presence is a nod to the real-world 947th Military Police Detachment, part of the U.S. Army’s 4th Battalion, 3d U.S. Infantry Regiment, otherwise known as The Old Guard. This unit has the second largest Military Working Dog detachment in the continental United States and works closely with the U.S. Secret Service, similar to their role in Fallout 76.

Retrieved from "https://fallout.fandom.com/wiki/Thompson_(Wastelanders)?oldid=3494290"
Community content is available under CC-BY-SA unless otherwise noted.