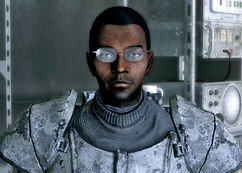 “So... you're in charge of Patterson's Suicide Squad, huh?”

Lieutenant Thomas Morgan is one of the American soldiers in the U.S. Army field headquarters during the Anchorage Reclamation simulation in 2277.

Lieutenant Morgan is a young officer inside the command tent of U.S. field headquarters on the outskirts of the main battlefield. He is witty, sometimes needling, but always professional, and he assists the Lone Wanderer with knowledge on current objectives and obstacles they may encounter. Offering hints at the best types of weaponry and strike teams to pick for particular missions, Morgan is a valuable asset and a keen soldier.[1]

Morgan is one of the only known members of the Intelligence Corps. As such, he works in counter-intelligence, deterring the Chinese from doing some serious damage. He received the intel about the Chimera depot as well as the troop positions in the mining town, ice camp, and listening post.

He refers to the strike team as "Patterson's suicide team." If asked about why he calls it that, he simply states that his humor is the only way he can cope with the cold.

He carries a 10mm pistol skinned with the wasteland version graphics, instead of the pre-War version typical in the simulation. He cannot be induced to draw the weapon, nor can it be pickpocketed from him.

Thomas Morgan appears only in a simulation in the Operation: Anchorage add-on for Fallout 3.

Retrieved from "https://fallout.fandom.com/wiki/Thomas_Morgan?oldid=3414537"
Community content is available under CC-BY-SA unless otherwise noted.