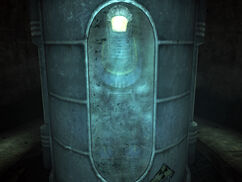 Thomas Jefferson is a protectron occupying a stasis chamber in the Archival Strongroom in the National Archives in 2277.

A protectron that was designed to mimic the mannerisms and quotes of Thomas Jefferson, this protectron is initially sealed in a pod. Jefferson's sub-routine is no longer available, unless the Lone Wanderer downloads Galaxy News Radio's signal into the protectron itself.[1] It will then reactivate and begin walking around, broadcasting Three Dog's radio station.

The TJEFF002 Thomas Jefferson Unit was designed primarily as a participant in the reenactments of the signing of the Declaration of Independence animatronics show. This unit was to play the part of Thomas Jefferson of Virginia, the primary author of the Declaration and later the third President of the United States of America. It was also programmed with the standard Tour Guide Assistance subroutines and limited Security subroutines.[2]

The last terminal next to the Protectron stasis container, labeled BACK001 Backup Protectron, can be used to activate the robot inside. Select Programming Sub-Routines, then choose TJEFF002 Thomas Jefferson. Go back to Execute Transfer and finally back to Activate Unit. The stasis will open and the Protectron within steps out and begins to walk around the utility room. However, because of a vocal module being switched, the Protectron plays the Galaxy News Radio broadcast. He remains neutral to the player character and companions. Although it is also wearing a wig, it is not lootable.

Thomas Jefferson appears only in Fallout 3.

Retrieved from "https://fallout.fandom.com/wiki/Thomas_Jefferson_(robot)?oldid=3236118"
Community content is available under CC-BY-SA unless otherwise noted.