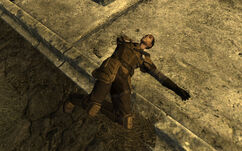 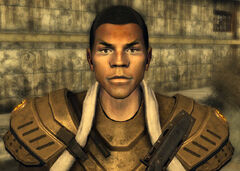 Ranger Thomas[1] Jackson was a New California Ranger stationed at Camp McCarran in 2281.

Jackson and his best friend, Ranger Esteban Morales were stationed together at Camp McCarran. When Esteban was killed by the Fiends, his wife, Private Christina Morales requested the retrieval of his body but was denied.

Jackson took it upon himself to retrieve the body of his fallen comrade without the brass' approval. His body can be found close to that of Ranger Morales' near REPCONN headquarters.[2]

Retrieved from "https://fallout.fandom.com/wiki/Thomas_Jackson?oldid=3291776"
Community content is available under CC-BY-SA unless otherwise noted.