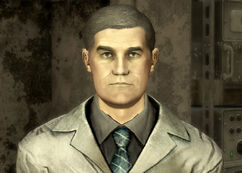 Followers of the Apocalypse (formerly)
Office of Science and Industry

“Too many people have opinions on things they know nothing about. And the more ignorant they are, the more opinions they have.”

Doctor Thomas Hildern is the director of operations of the Office of Science and Industry (OSI) East, living in the Camp McCarran in 2281. He is a colleague of Angela Williams.

Hildern is an intelligent man, who received a complete education from a Followers of the Apocalypse center of learning,[1] although he did not agree with their egalitarian views.[2] The disagreement resulted in him joining a group of like-minded people and the formation of the Office of Science and Industry, a splinter organization of the Followers focusing on finding practical application for knowledge, rather than research for knowledge's own sake.

However, Hildern is dissatisfied with the end result and considers executives at OSI Central in Shady Sands to lack direction. For him, it'd be best to establish strong leadership, stop coddling "free spirits" and keep everyone in line focusing on certain, well-defined goals.[3]

As director of the Eastern division, Hildern supervises his team on optimizing the power output of Hoover Dam and other local energy production facilities[4] and supervises various contributions from the OSI to Republic-funded projects, such as the NCR sharecropper farms.[5]

As a side project, Hildern also oversees research into the problem of projected food shortage in the Republic. Currently, the food shortage is not a problem, but from conducted studies, it's been projected that the NCR's population will grow significantly in the next decade and would lead to mass food shortages as production can no longer meet demand. The NCR has been granted permission to Hildern preemptively research a solution.[6] Officially, they are making little progress, though Hildern has identified a potential breakthrough: Vault 22. However, since any expeditions to the vault would need to be sanctioned by the OSI and risk undermining Hildern's career prospects, he does it under-the-table, without any official authorization from and filing the necessary paperwork.[7] He sent up to ten people to their deaths in the vault, with the final contractor being Keely (although Hildern personally believes she wages a personal war on him and the Office.[8])

It is unknown if Hildern actually does any research.[9] He is, however, known to take credit for the work others do.[10]

Although Hildern puts on the facade of a calm, rational researcher, he is in fact quite ambitious, hoping to prove himself to President Aaron Kimball and earn a promotion to an OSI Central executive.[3] He shows his more violent side, when he reacts with fury and overt threats should the data from Vault 22 be destroyed,[11] as he considers it NCR's best bet to avoid the projected famine in Republic lands, though he is apparently more concerned about his unofficial pet project as a guarantee of advancement in the OSI ranks, rather than salvation for the Republic.[8][12]

His confidence in himself, the OSI and the government freely enters the realm of total arrogance.[13] To make things worse, he is quite careless with the lives of OSI outside contractors, contrary to his claims of putting great value on them and significant benefits.[14]

Others describe him much less positively. Apart from taking credit for the work of others, he is also considered by at least one scientist contractor, Keely, as a politician, not a scientist, and one that more often than not stands in the way of true discovery. His subordinate, Angela Williams, also compares him to a deathclaw, when he goes up against Keely, who also has a habit of embarrassing him in front of important people.[15] Arcade Gannon, a Follower of the Apocalypse, looks at what Hildern is trying to achieve as objectively good but espouses that his "big picture" mentality puts him at odds with what he's trying to achieve. Especially when people he's meant to be helping are simply another number in a ledger.[16]

Retrieved from "https://fallout.fandom.com/wiki/Thomas_Hildern?oldid=3272705"
Community content is available under CC-BY-SA unless otherwise noted.