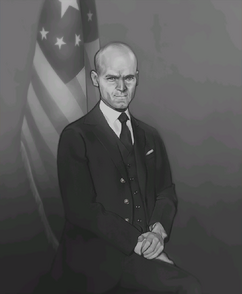 President Thomas Eckhart was the president of the Appalachian detachment of the Enclave from 2083-2086. Eckhart rose to power through political maneuvering before the Great War and purges of surviving opposition members in the Whitespring bunker. Eckhart is also primarily responsible for the creation of the scorchbeasts and the spread of the Scorched Plague.

Son of disgraced American businessman Joseph Eckhart, Thomas was embarrassed at the young age of 16 by his father's damning indictment of U.S. capitalism and defection to China. Bereft of good standing or a company to rule, as it was liquidated and distributed to worker's advocacy programs worldwide, Eckhart turned his bitterness into a single-minded pursuit of power with the goal of eradicating communism and its adherents once and for all.[1] His drive and dedication eventually led him to the position of Secretary of Agriculture in the last United States administration, where he became a fervent promoter of the idea of a preemptive nuclear strike on China - an idea that was consistently dismissed by the powers that be, with Eckhart recommended to focus on pursuing the goals of his department.[2]

However, his ardent opposition to communism and fervent nationalism has led to him becoming a natural candidate for selection into the innermost enclave of power of the United States government. The relatively benign Department of Agriculture was the perfect cover for funding the Whitespring bunker, with money funneled from the Department's coffers under Secretary Eckhart's oversight at a grand scale.[3] The amount of time and money spent by the Department did not escape notice, especially from Appalachian senator Sam Blackwell and his contacts. Fortunately for Eckhart and the project, the senator did not manage to blow the lid off the project.[4]

When the early warning systems activated on October 23, 2077, as Enclave and regular government officials alike scrambled for shelter from the coming nuclear war, Eckhart was already in position beneath the Whitespring. He was one of the few to make it to safety. Only a select few other members of the Enclave made it to safety, including the Secretary of the Interior and a number of high ranking officers. The rest were left to fend for themselves.[5] All non-Enclave personnel who arrived at the Whitespring bunker were rounded up and shot, including members of Congress who thought that a Congressional bunker would save their lives.[6] The survivors were horrified to learn that connections to Raven Rock and the President at Control Station ENCLAVE were lost, leaving them isolated.[7] However, it played right into Eckhart's plans, allowing him to seize the opportunity and lead the fight against communism. After gathering the survivors in the conference room, Eckhart informed them of the isolation and the death of the Secretary of the Treasury due to "radiation sickness," then announced himself as the new leader of their "little enclave," as per the line of presidential succession.[8]

He then offered them a choice: Using the Whitespring to continue the war against communism and the enemies of America, until no enemies stand against them, or opposing his plans. As the Enclave was supposed to be the bastion of democracy, he called for a vote with their feet. Everyone who supported his idea of using the facility and Appalachian resources was asked to stand at the left side of the room, by the entrance. The rest were to stand against the wall on the opposite side. Many sided with General Swafford, who opposed continuing the now pointless war. Eckhart was disappointed but prepared. He had his supporters exit the room, while MODUS sealed the opposition inside, leaving them to suffocate.[8]

Although the purges entrenched Eckhart's control, he only had 48 people left to "save" democracy with. He wasted no time in briefing the survivors on his plan that involved the complete eradication of communism using any means necessary, with no moral or ethical constraints. It was total war and no option was off-limits, even a repeat of the nuclear nightmare.[9] Eckhart had not forgotten his idea of resolving the great ideological struggle with nuclear weapons. However, the biggest obstacle in his plan to use the Appalachian nuclear network was the fact that all but one general, T. Harper, was eliminated in the "vote." He needed a general for his war plan and he needed more people for the Enclave to survive. He ordered MODUS to assign an escort to Harper around the clock, while scouts were to keep out an eye for potential candidates for "recruitment."[10]

By mid-2080,[11] the Responders became a natural source of recruits, though many would require brainwashing in order to be pressed into the Enclave's ranks. Eckhart was keenly aware that torture would not lead the United States back to supremacy, so he was elated when scouts under Major Ragnarsdottir revealed that West Tek's FEV research survived the nuclear blasts and - despite his hatred for the Chinese - that a Chinese infiltration base at Mama Dolce's Food Processing near Morgantown was secured by Agent Grey. Both of these would become vital parts of his plans. The scouts also revealed that the election system could be hacked, in order to allow Eckhart to become the President of the United States, and by extension, the Enclave.[12]

However, the path forward proved rocky. Apart from multiple casualties sustained in the process of perfecting mutation serums, the plan for unleashing nuclear devastation on China were hampered by the automated safeguards built into the nuclear arsenal. Simply having a general on hand to access the nuclear silos wasn't going to lead to nuclear launches. As work continued on advancing Eckhart's plans, the Enclave experienced a sudden windfall in late 2082, as a group of soldiers led by Colonel Ellen Santiago arrived at the bunker, acting on rumors they heard about the bunker. With no sensible alternatives, Santiago led her men from the still smoldering remains of Washington, D.C. to Appalachia, arriving at Eckhart's doorstep. Eckhart was elated to have a veteran at his disposal and lured her into service with promises of revenge against the Chinese.[13]

With an influx of veterans, the work towards the eradication of communism advanced at a rapid pace. The experiments with mutations continued in parallel with work on accessing the nuclear arsenal, resulting in many working serums, and the first scorchbeasts, accidentally created when Enclave scientists exposed irradiated bats to biochemical experiments the previous year. Eckhart ordered further study of the creatures in controlled habitats at the abandoned AMS mining complexes while keeping the officer corps in the dark.[14]

He was making a disastrous mistake, but Eckhart had no time for reflection. Just three months later, in January 2083, Eckhart's men completed reprogramming the Appalachian election machines. Although General Harper expressed reservations about mobilizing men to vote for Eckhart, granting him the title of President, the Secretary believed it was necessary to give the men of the Enclave an authority to look up to. They only knew two: God and the President, and there was no way to create the former.[15]

Eckhart wasted no time in asserting his authority over his subordinates, especially Colonel Santiago. In one notable instance, he revoked a sergeant's permission to leave the bunker and search for his wife in the region, berating the colonel for giving special leave in wartime and potentially leading an outsider to learn about the bunker and join the Enclave as a "little housewife." Santiago had no choice but to accept Eckhart's stance. However, the President's heavy-handed approach started to make the colonel reconsider her decision to join without full knowledge of what was going on at the Whitespring.[16]

The situation deteriorated in late 2083 when General Harper died of heart failure brought on by radiation poisoning. Eckhart's plan for nuclear retaliation crumbled before his very eyes as MODUS attempted in vain to shock the general's heart to life.[17] With his plan thrown off the rails, Eckhart salvaged the situation by sending Santiago to Camp McClintock and making her earn an automatic promotion to general by exploiting the same system that gave him the presidency. Santiago succeeded, although the way in which she earned the stars disgusted her.[18]

Still, it worked for Eckhart. Not only did he have a general and thus the means to access the silos,[19] he could also offload the task to seek out nuclear launch codes to her and her men. The search was complicated by the way in which the codes were distributed, assigned to aide de camps to carry on their backs or delivered by National Catastrophe Relief Auxiliary automated Cargobots,[20] but also the fact that even with the key and codes they could not launch without somehow tricking the automated system into raising the alert level to DEFCON 1. Eckhart and Agent Grey already had a plan in motion for this occasion, aiming to use the Liberators, Huntersville super mutants and the mighty scorchbeasts to unleash hell upon Appalachia and trick the system into believing an invasion was underway. Although everyone wanted to win the war, putting Appalachia through hell was making many reconsider - especially Major Ragnarsdottir, who explained the situation to Santiago.[21]

As the soldiers struggled with their consciences, Eckhart took time to order an assassination of former Senator Sam Blackwell. Remembering the threat he posed before the Great War from his alignment with the Free States, Eckhart realized Blackwell was still in possession of a Senate ID, which would allow access to the bunker, so he sent agents to find and eliminate the former senator. The senator's sudden appearance at Harpers Ferry, and subsequent elimination of an Enclave operative before disappearing again, left Eckhart furious.[22]

Believing all the cards to be in his possession, Eckhart ordered the attempts to raise the DEFCON levels to begin. Liberators and super mutants were unleashed on Appalachia, but all they managed to achieve was barely a tick on the DEFCON counter. Angry with the half-measures and lack of success, Eckhart planned to move ahead with even more radical attempts. However, his single-minded pursuit of nuclear capability and the sheer amount of blood shed in the process finally broke the straw. General Santiago realized that revenge against the Chinese was not worth paying such a steep price and confronted Eckhart in July 2084, threatening to leave with her men. Eckhart tried his usual flattery and playing on Santiago's thirst for revenge, but she remained adamant. Realizing that he was in danger of losing, Eckhart instead chose to incapacitate her with a knock-out agent and keep her in an artificially-induced coma until he had need of her clearance.[23]

She was kept in this coma until June 2086. With nobody to oppose him, Eckhart unleashed the scorchbeasts on Appalachia, with the terror and destruction brought down by them successfully raising the alert level to DEFCON 1. Dismayed and demoralized by the brazen disregard for American life, Santiago's loyalists and members of Eckhart's officer corps staged an open revolt. Fighting off robots and Eckhart's troops, Captain N. Jackson and one-time Eckhart supporter Major Ragnarsdottir revived Santiago, who gladly assumed leadership of the uprising.[24]

However, while Eckhart was placed under arrest, the uprising ultimately failed. Santiago's decision to destroy MODUS backfired and the AI turned on all human members of the Enclave. After an explosion tore out a large part of MODUS' memory, the damaged AI retaliated with an explosion in the weapons lab that killed General Santiago and ruptured a toxin tank that leaked into the air circulation system. MODUS promptly sealed the bunker, dooming all within - including President Thomas Eckhart - to an ignoble death, choking to death in darkness.[25]

Thomas Eckhart is mentioned only in Fallout 76.

Retrieved from "https://fallout.fandom.com/wiki/Thomas_Eckhart?oldid=3259926"
Community content is available under CC-BY-SA unless otherwise noted.