Thistle is a consumable item in Fallout 76.

A thistle is a flower that grows on thistle plants, found in the Toxic Valley region of Appalachia. Similar to the giant pitcher plant and firecracker berry, the thistle plant is volatile. When trampled, they will start to rattle before exploding, creating toxic smoke and dealing 30 radiation damage in a medium radius. The flowers cannot be gathered afterward.

The harvested flower can be consumed raw to satisfy a negligible amount of hunger with a medium dose of radiation and low chance for disease, or can be cooked for additional benefits.

When affected by a blast zone, thistle will mutate into irradiated thistle which will yield raw fluorescent flux when harvested.

Prior to patch 1.5.1.26, harvesting from irradiated thistle yielded regular thistle.[patched] 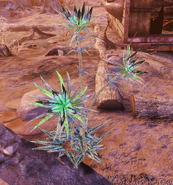 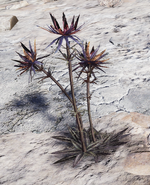 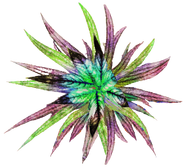