Thistle is a consumable item in Fallout 4.

Thistles can be found growing on irradiated thistle plants in the Commonwealth. They appear to be a mutated version of the average thistle plant.

The plants themselves act as traps; when approached, the thistle will explode causing a cloud of highly radioactive dust to fill the air. The radiation is more powerful based on proximity to the plant itself, up to 22 rads per second. The explosion occurs about five seconds after being triggered, giving plenty of time to simply collect the thistle and stop the detonation, or walk out of its range. However, there is no visual or auditory warning that the plant is going to explode, which can cause it to catch the player character off-guard if they are not aware of its presence or effects.

Thistles tend to be found away from settled or urban areas. 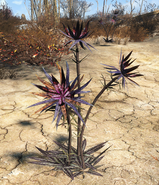 The radioactive cloud ejected from the plant 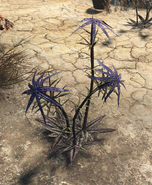 Thistle plant after detonation or harvesting

In The Art of Fallout 4
Русский Українська
Community content is available under CC-BY-SA unless otherwise noted.
Advertisement