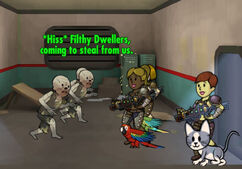 “Love is in the air, and just like radioactive fallout -once it gets inside you it doesn't get out! All we need now is a ring to pop the big question. We might have some luck finding Pre-war jewelry in a nearby abandoned building.”

This Golden Ring is an overseer quest and part of The Book of Wuv multi-stage questline in Fallout Shelter.

Enter the five floor building, and head down the elevator and clear the two rooms underneath. You may encounter radroaches, mole rats, and feral ghouls on this quest.

Around the first or second floor up from the ground floor is a group of feral ghouls, which prompts a dialogue choice. Selecting "I don't want your “prize,” whatever it is. I'm looking for gold" will prompt the ghouls to give the party a single bottle of Nuka-Cola Quantum, otherwise a fight will ensue.

At or near the top floor of the building, there are two feral ghouls and a glowing one. Defeating them will result in locating the gold watch (the something gold) and completes the quest. The room they are in contains an additional bottle of Nuka-Cola Quantum.

If the answer "You don't kill us, we kill you," is selected, one bottle of Nuka Cola Quantum will be earned after the battle.

The quest is based on The Lord of the Rings character, Gollum and his obsession with the One Ring.

Add a photo to this gallery
Retrieved from "https://fallout.fandom.com/wiki/This_Golden_Ring?oldid=3177136"
Community content is available under CC-BY-SA unless otherwise noted.