A think tank is a unique brain bot. It consists of a robotic sphere-shaped body housing a human brain, with three monitors attached to the robot's chassis, allowing a person to continue living beyond the lifespan of their biological bodies.

The "Think Tank Project" was a scientific project created in Big MT. The project's purpose was to preserve the six Big MT executives. These now-robotic scientists are Klein, Mobius, Dala, 0, 8 and Borous.

A think tank uses the same principle as a robobrain: the brain is held inside a hardened glass container at the top of the robotic body, suspended in pressurized bio med gel (which can take many colors). However, unlike a robobrain, the brain within a think tank never had its memory wiped, retaining all memories and emotions it would have had prior to becoming a think tank. The robotic body has three monitors protruding from the robot's chassis. Two of these monitors depict eyes and the other depicts a mouth. In addition to allowing a person to continue living by using their brain as a power source, it provides a container and mobile platform so the operating human brain may observe and approach various items. Like eyebots, think tanks levitate by means of an unknown propulsion system.

They are able to communicate verbally due to a voice module which is integrated into the robotic chassis and connected to the brain. If damaged, the think tank can continue to communicate but only through radio waves. Despite not being designed for fighting, they have "an arsenal of vivisectors, brainial beams, and a rather nasty WooEEEOooWooEEEOoo ray that can make your atoms do a happy dance" for self-defense.

Think tanks appear only in the Fallout: New Vegas add-on Old World Blues and were to appear in Van Buren, the canceled Fallout 3 by Black Isle Studios.

In Fallout Tactics, a similar brain bot appears named humanoid brain bot. The experience was used on Simon Barnaky by the humanoid robots of the Calculator. His brain was implanted into a large robotic suit and connected to a robotic program. But compared to the think tank, only its temperament and a part of the previous consciousness remains, the robotic programming is superior and the humanoid brain bot has trouble displaying human emotions and remembering its feelings and personal life. 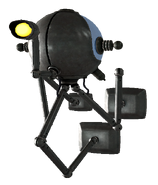 Demonstration of various colors of the bio med gel 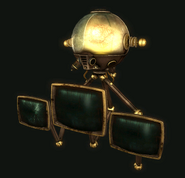 Retrieved from "https://fallout.fandom.com/wiki/Think_tank?oldid=3055587"
Community content is available under CC-BY-SA unless otherwise noted.