Loxley, the Thieves' Guild's leader.
“This is the famous Thieves' Circle! I thought you would've known this, seeing's how you made it through all the defenses and whatnot. But no matter. You're quite promising, and the Circle could use someone like you.”— Loxley.

The Thieves' Guild or Thieves' Circle is a small group of thieves led by the slightly crazed and rapacious Loxley. They can be found beneath a small shack in the Hub's Old Town.

The Guild's organization is fairly disjointed due to the group's small nature. Therefore, most members govern themselves rather than answering to a head entity. The leader of the guild is Loxley, who manages the Guild's functions. The three other members in the hideout are Jasmine, Cleo, and Smitty.

Jasmine is Loxley's assistant who handles all the details of assignments and payment for anyone running a job for the Guild. Cleo explains the Guild's feelings towards the outside world, possibly indicating she serves as a sort of diplomat for the Guild. She seems reluctant to speak to outside members in the Guild. Smitty is an angry, guarded individual who likes to keep to himself.

They have access to a variety of traps, such as tripwires and mines. Due to their tendency to operate from the shadows rather than strong-arm their victims, they do not use many weapons.

The guild, if the Vault Dweller is accepting, possesses a quest to steal a diamond necklace from Daren Hightower in the Heights. If successful, the Vault Dweller will be rewarded with some bottle caps and an electronic lock pick, which is very useful for breaking into the Mariposa Military Base. Jasmine tells the player not to kill Mr. Hightower, but if he is killed, the player will be rewarded just the same.

The Thieves' Guild only appears in Fallout. 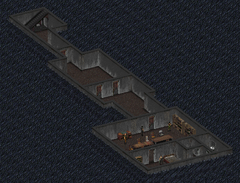