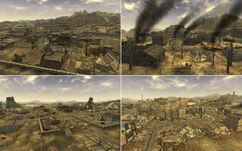 Time for a long trek

“A man nearly kills you, so you track him across the breadth of the Mojave?”— Caesar

They Went That-a-Way an achievement/trophy and the first main quest in Fallout: New Vegas.

After getting stitched up and enlightened on some useful wasteland skills, the Courier leaves Goodsprings to track the man that shot them in the head, visiting many settlements in their search for clues.

After obtaining and reading the journal, or if Deputy Beagle has told the Courier the next location, the next stage of the quest will begin: heading to Novac through Nipton.

Retrieved from "https://fallout.fandom.com/wiki/They_Went_That-a-Way?oldid=3351400"
Community content is available under CC-BY-SA unless otherwise noted.