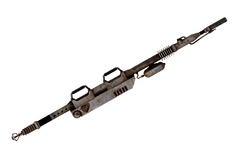 The thermic lance is a weapon in Fallout: New Vegas.

It is heavy, but deals considerable damage because its continuous penetrating action allows it to bypass the target's Damage Resistance and Damage Threshold. It is very durable, and also resists damage to itself if hit when used defensively (taking only 0.5% of normal durability damage). Due to its automatic attack-type, it will degrade at a faster rate than other weapons when used.

Unlike most melee weapons, holding down the attack button when wielding the thermic lance will cause continuous damage to targets in contact with the tip. While it has a low critical damage rating and critical chance multiplier, its automatic operation allows for 5 chances for a critical hit per second.

It has a special Scrap Heap attack that does 50% damage in V.A.T.S. at the cost of 20 less action points (requires a Melee skill of 50).

It is not possible to execute Scrap Heap outside of V.A.T.S. as power attacks do not apply to continuously damaging melee weapons, such as the Chainsaw or Ripper.

The thermic lance can successfully strike about 9,995 times from full condition before breaking.

Thermic lance is another name for a thermal lance, a real-world metalworking tool.