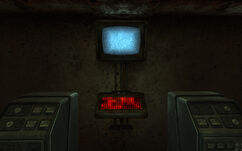 “Imagine, if you will, the wasteland in bloom... vast fields of corn that grow from seeds and produce their bounty in the space of a month... orchards of trees, their branches weighed halfway to the ground, hung with fat, ripe oranges. A harvest that could feed a city... or a nation. And all this... all this... requiring no more than a few of drops of precious water, and the efforts of only a handful of human farmers. Impossible?”— Dr. Hildern

There Stands the Grass is a side quest in Fallout: New Vegas.

To start the quest, speak to Dr. Hildern at Camp McCarran. Dr. Hildern can be found in his office located inside the Camp McCarran terminal building on the east side of the terminal in the south wing. After speaking to him, he will tell the Courier that Vault 22 has data on its computers that will help prevent a future food shortage. He will give the player character the location to Vault 22 and ask them to enter and download the experimental data onto their Pip-Boy. Before leaving the base, make sure to speak to Angela Williams in order to get the optional objective to find Keely, a researcher who went to the vault before and is now missing. One finds out from Dr. Williams that Dr. Hildern has sent others on this task but none of them have returned. If he is spoken to again before heading to Vault 22, one can demand that he double the caps he is paying for the job (40 Speech is required). To get this option, one must not have delivered the invoice from the Crimson Caravan, or one will only have the option to say goodbye (fixed or not always happening)

The vault is easily found by following the map marker. Quite a few cazadores roam the area near the vault. There are large and colorful plants outside the entrance, and a sign saying, "Stay Out! The Plants Kill!". There are also four giant mantises hiding in the foliage. The door is permanently open and has a curtain of overgrown plants.

Inside the vault are numerous mantises and spore carriers hidden in plant beds. Spore carriers blend in with the vegetation and will not show up as enemies on the compass until they are disturbed. On Level 5 - Pest Control, there are spore plants who spit spike projectiles.

There are many password-free terminals throughout the vault which can be accessed to find some of Keely's notes and information on what became of the Vault's inhabitants.

Once inside one has the option to repair the elevator (Repair 50) or walk the five levels by stairs. Since access to some staircases is blocked, repairing the elevator will make things easier.

With a Lockpick skill of 75 or higher, one can take the elevator directly to Level 5 - Pest Control and unlock the data bank room. If one has not repaired the elevator or does not have a high enough Lockpick skill, or are also doing Still in the Dark and/or Bleed Me Dry, the player character will need to go to the Overseer's office on Level 4 - Common Areas. Follow the signs through the common areas to the Overseer's office where one will find a terminal (no password needed) that can be used to unlock the crew quarters, the data banks, and the cave entrance. (The crew quarters can also be opened with a Lockpick skill of 50.)

Trying to disengage the cave entrance lock will give one the error message: “Override engaged at door site.” A keycard will need to be retrieved, which is located in the crew quarters (now unlocked via the Overseer's computer). The keycard is in the first room on the left side of the hall as one enters the crew quarters, on a shelf to the right of the entrance. There are three spore carriers waiting inside.

(NOTE: there may be a glitch on the metal shelf where the keycard should be. Items will be invisible and only the item identification will be shown upon scrolling over where the object should be. In this case the key card will be on the bottom shelf in the right corner next to a couple of purified waters.)

With the keycard, climb back up the stairs to Level 3 – Food Production (the stairs to Level 5 are blocked) and follow the arrows until one sees a door to the caves. The keycard will access the adjacent terminal, where the lock can be disengaged. The vault door to Pest Control will be down towards the left in the cave. Follow the arrow to the door.

Once the player character is on Level 5, they can access the Data Room either by picking the lock or having disengaged it from the Overseer's office. At this point one can finish the quest by downloading the data and returning to Hildern, or, either with or without downloading the data, one can look for Keely (this will provide opportunities for additional XP, caps, and either positive or negative Karma).

To find Keely one must locate one of two entrances to the cave where she is stranded. The shortest route is through a room with a hard lock (Lockpick 75). Open this room and there will be a cave entrance. There are plenty of spore plants and mantises in the cave, even a family of baby mantises. Follow the arrows to find Keely. If one does not have a high enough lockpick skill, the room adjacent to the room with the hard lock has another cave entrance. The entrance is partly concealed by a computer wall panel that is been moved slightly from the wall. This route takes a bit longer.

Keely can be found at the far end of the caves. She is on the south end of the cavern sitting alone next to a mantis pod. She will ask the player character to meet her in her lab on Level 2 - Oxygen Recycling. If one has not repaired the elevator yet, Keely will do so at this point, making the trip up and down a bit easier.

Upon seeing Keely on Level 2, she will tell the Courier about her plan to eliminate the contagious spores. She is pumping flammable gas through the vents on Level 5. She wants the player character to find the vents and ignite the gas, without dying in the process.

There are several ways to achieve the intended outcome. First, go to level 5 and locate the "vents", which one can identify by the fuzzy distortion of the air. The vents can be found in an area at the end of the hallway nearest the Data Room and the room nearby room full of mantises.

Next, one will need either explosives or an energy weapon with which to ignite the blast. If one does not have any, grenades can be obtained from Keely's duffle bag in her lab; the AER14 prototype is accessible through a Very Easy locked door on the fifth level, and a flamer can be found in the same room on the fourth level.

Finally, upon igniting the vents, one needs to survive the resulting blast. This can be done either by hiding in the reinforced data room with the door closed, by making it to the elevator before the blast reaches the player character (see below), or by simply surviving the substantial fire damage that the blast causes.

The following methods for surviving blast are ranked by the chances of minimizing or escaping damage entirely:

Upon returning to Keely after igniting the gas from the vents, she will tell the player character that she intends to destroy the research data. If one has the files she will discover they were downloaded. One have multiple options from here:

After whatever option was chosen, one must return to Dr. Hildern.

The title of the quest is a reference and pun on the 1953 country song "There Stands the Glass", performed by Webb Pierce.

Retrieved from "https://fallout.fandom.com/wiki/There_Stands_the_Grass?oldid=3354571"
Community content is available under CC-BY-SA unless otherwise noted.