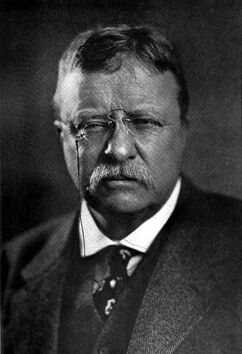 26th President of the United States

Born into a wealthy New York family, Roosevelt led a romantic American life. Adventuring, military service, and politics were interwoven into his life, starting with his election to the New York State Assembly in 1881, where he became the leader of the reform faction of the Republican Party. After his wife died in 1884, he left New York to become a rancher in the Dakotas but returned when his cattle died in a blizzard. He returned to lose in a mayoral race but instead took charge of New York's police force during the 1890s as Commissioner.

By 1897, Roosevelt was Assistant Secretary of the Navy. When the Spanish-American War broke out in 1898, he organized affluent Easterners and Western cowboys into the famous Rough Riders and gained a reputation as a war hero in his battles in Cuba. He returned to be elected Governor of New York in 1899 and became President William McKinley's Vice President. With McKinley's assassination in 1901, he became President and attempted to shift the Republican Party toward Progressivism, including breaking up trusts and increasing regulations on big business. He was widely popular because of his "Square Deal" to the American public which proposed consumer protection, control of corporations, and conservation of natural resources. Demonstrating his dedication to conservation, he refused to shoot a defenseless black bear while on a 1902 hunting trip; this gave rise to the ever beloved children's toy, the teddy bear, which was named after Roosevelt.

Theodore Roosevelt is mentioned in Fallout 3 and Fallout: New Vegas.

Retrieved from "https://fallout.fandom.com/wiki/Theodore_Roosevelt?oldid=3262708"
Community content is available under CC-BY-SA unless otherwise noted.