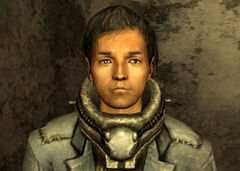 “On the way we lost Theo, one of my guys. We were unable to get the ammo case off of his body as we were pushed onwards.”— Reilly

Theo is a recently-deceased probationary member of Reilly's Rangers in 2277.

Theo was 22, and the quartermaster, caring for all the equipment and carrying additional ammunition that might be needed during a mission. On a probationary contract pending Reilly's decision, Theo recently succumbed to super mutant ordnance somewhere within the sprawling Statesman Hotel, near where the remaining team is holed up.[1]

Theo appears only in Fallout 3.

Retrieved from "https://fallout.fandom.com/wiki/Theo?oldid=3245339"
Community content is available under CC-BY-SA unless otherwise noted.
... more about "Theo"
RDF feed
Has platform
PC +  and Xbox 360 +