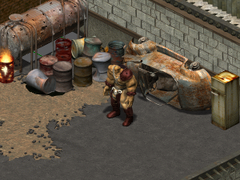 “You are such a fool! You think you're doing the wasteland a favor by fighting us? We are the wasteland's last chance. The menace from the west doesn't know pity, or remorse, or fear and it will not stop until everything is dead. Only Super-Mutants can stop this threat and we need this lab to solve our sterility problem to build up our numbers. You fight on the side of ignorance. I fight for salvation.”

Thelma is a super mutant commander in Gammorin's Army, supervising their forces in Jefferson in the year 2197

Thelma is large, smelly, and extremely hairy. She is considered to be quite a good-looking mutant by their standards and extremely loyal to Gammorin, she has dedicated her life to providing a stable platform for research into mutant sterility. Thelma's motivation is to have children. Anyone attempting to stop that will be dealt with harshly and packaged into separate tiny boxes.

When the Warrior and his squad found her around 2198, keeping the main door above the laboratory, she warned them that the menace from the West, the Calculator's robots, will never stop and the super mutants are the only hope to stand against it. After that, she rushed a desperate assault with no more than a cattle prod in hand and without support against the Warrior and his squad, she is finally killed.

Thelma appears only in Fallout Tactics.