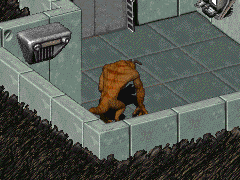 Retrieve the GECK for Arroyo
Stop the Enclave

Thearn is a member of the pack of intelligent deathclaws who are lead by Gruthar and reside in Vault 13.

He, along with the rest of the pack, is killed by the brutal Enclave killing machine, Frank Horrigan.

Retrieve the GECK for Arroyo: The Chosen One may inquire as to where they can find a G.E.C.K. in Vault 13.

Thearn appears only in Fallout 2.

Retrieved from "https://fallout.fandom.com/wiki/Thearn?oldid=3286960"
Community content is available under CC-BY-SA unless otherwise noted.