The trouble with Florence 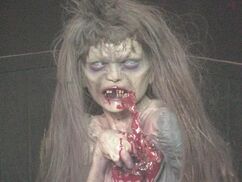 The trouble with Florence was going to be a quest in Van Buren, the canceled Fallout 3 by Black Isle Studios. It is located at the Reservation.

Florence never garnered much respect from her fellow ghouls. Even though she was part of the original Reservation ghouls, she was still looked upon like a loser. Maybe it's because Florence collects junk far beyond what most ghouls would even consider holding a minimum value; maybe it's because she insists on cleaning everything in her immediate area, despite the fact everything in her immediate area is charred and dirt imbedded from centuries of exposure; or maybe she still carries the stigma of being "that grumpy, old janitor lady." Whatever the case, the ghouls in the Reservation treat Floe like crap and she's sick of it.

The player may find Floe either cleaning her hopelessly ruined office space in the broken office building, or scavenging through the debris in the helicopter hangers. She will be quick to speak with the player, offering to trade her crap for the player's crap (she is a store, too, but a crappy store). If the player digs a bit through dialogue, he will learn of Floe's social dilemma. She will state that if she only knew how to fight (non-lethal unarmed or melee – ghouls killing other ghouls in the Reservation garners the Endless Walk), she could earn enough respect among her teasers so she may exist in peace and quiet. It would not be so bad if the other teasing ghouls simply left her alone, but they don't and Floe's life is fraught with day-to-day fear and loathing. If the player offers to teach Floe, she will be insistent on learning either Shinkpapa or Powpapa – the Scaven Pickers' unique combat styles. She will say she has seen this style first hand and is convinced there is no superior style. She will then tell the player if he is truly interested in helping her, then the player will need to seek out Klik, the Scaven-pickers' leader, and learn from her. The payoff for the player is not only learning a new in-game fighting style, but also Floe knows a few secrets about the Reservation and has even successfully snuck down into Sub-level 1. Floe will relay this info to the player only if the player learns the fighting style and then teaches her.

If by some chance the player killed the Scaven-pickers, then all is not lost. If the player has Unarmed > 120 or Melee > 120, then he can demonstrate what he knows, which should convince Floe that his style of fighting should be adequate for her needs. This option only comes up if Klik and her crew are dead or convinced to leave the area around the Reservation.

Retrieved from "https://fallout.fandom.com/wiki/The_trouble_with_Florence?oldid=2810711"
Community content is available under CC-BY-SA unless otherwise noted.