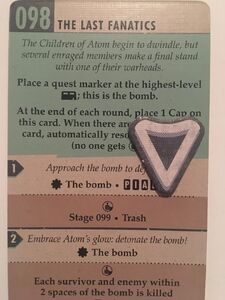 The bomb is a dynamic location in Fallout: The Board Game. It is a live bomb that is rigged to explode by The Children of Atom.

The bomb is an extension to the highest-level settlement on the map.

The bomb will only appear in the game during the quest The Last Fanatics.

Even if the bomb explodes, the settlement will not be destroyed.

Retrieved from "https://fallout.fandom.com/wiki/The_bomb?oldid=2863761"
Community content is available under CC-BY-SA unless otherwise noted.