The Whitespring Resort is a location in the Savage Divide region of Appalachia, the main building in the larger area known as the Whitespring.[1][2]

Built in 1858, named after a natural sulphur spring on the grounds, the Whitespring Resort offered a wide array of shops, dining, and “exciting sporting opportunities for distinguished ladies and gentlemen."[3][4] Even after the Great War, Vault Dwellers in Appalachia can use several amenities provided by the resort, such as the various vendor robots.[5]

Every floor has several employee areas that have robot pods and miscellaneous storage. The doors are unlocked and one will not incur consequences for taking their contents. Robots walk throughout the hallways, serving as vendors, security, housekeepers, and concierge. Damaging one robot will cause all to turn hostile.

The shops line the left and right sides of the hallway and at the end is a small lobby, the north entrance, the unoccupied Candy Shoppe, and two elevators. The retail shops contain vendors from every faction in Appalachia. In the Artisan's corner, there are workbenches and two stash boxes. Workbenches include two weapons, two chemistry, two power armor, one brewing station, four cooking, two armor, and four tinker's workbenches.

Upstairs from the front entrance, where there will be an upper lobby. To the right will be a series of rooms, including the soda fountain and lobby bar. To the left is the dining room. Going down the hall, near the bar and soda fountain is a foyer. Past the foyer is a parlor with two elevators leading to back to the Candy Shoppe. In the upper lobby, on the opposite side, is the dining room.

Going down the hallway near the dining room will lead to the ballrooms. There are four ballrooms, three of which are locked. The West Virginia room is the first, followed by the unlocked Summit room, and lastly the Allegheny room and Governor's Hall. At the end of the hallway will be elevators and stairs leading up to the third floor.

The third floor is accessible by elevator or by climbing the stairs directly in front of the Governor's Hall. Once turning left, there is a hand scanner on the wall which reveals a hidden hall leading into the Whitespring bunker. This hand scanner is only accessible once the player character has completed the One of Us quest.

The Whitespring Resort appears only in Fallout 76. 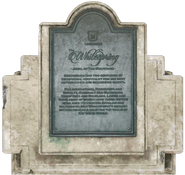 Candy Shoppe office
Add a photo to this gallery

Back hallway with Lotus

Summit room
Add a photo to this gallery

Hidden entrance to the Whitespring bunker

Entrance
Add a photo to this gallery

Retrieved from "https://fallout.fandom.com/wiki/The_Whitespring_Resort?oldid=3496743"
Community content is available under CC-BY-SA unless otherwise noted.