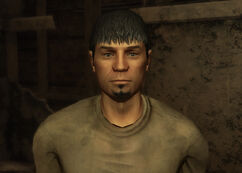 “White had a lot of promise. Wanted to be a ranger as bad as anyone I've seen. But he also had some extracurricular activities going. Now he's gone.”— Lt. Boyd

The White Wash is a side quest in Fallout: New Vegas.

Get I Put a Spell on You from Colonel James Hsu, then talk to Captain Ronald Curtis. Once this is done, the Courier will be able to talk to Lieutenant Boyd about missing people. After talking about Bryce Anders, there will be an option to ask who else is missing. She will say that Cpl. White has gone missing and will direct the Courier to Dazzle, a prostitute at Gomorrah. Make sure to check Corporal White's things and get Corporal White's journal entry. Then go to the Strip and meet Dazzle, in the Gomorrah courtyard. She will talk about how White used to always talk about the water treatment plant and mention a man named Trent Bascom (the same info can be found on her body, if she is dead). Bascom is located on the east side of the NCR Sharecropper Farms.

After talking to Trent, the Courier will discover that White talked to Lieutenant Romanowski but got nowhere. Pickpocketing Note from Corporal White from Trent will yield the same information. Talk to Romanowski to reveal that White went to Tom Anderson, a Follower of the Apocalypse in Westside. Alternatively, Romanowski holds a note called Reprimand recommendation that contains this information.

Travel to Westside and head to Casa Madrid Apartments. Anderson's apartment is on the north side on the ground floor. Talk to him and pass an Intelligence check (6) to discover the truth behind White's disappearance. Alternatively, if the Courier is on good terms with the Followers of the Apocalypse, they can convince him to tell the truth.

If the Intelligence check is failed and the Courier cannot convince him otherwise, Anderson will tell them to ask around Westside to find out what happened to Corporal White. Hector, a young boy working on the farms, has a Speech check (80) that can be used to get him to tell the Courier that Anderson confronted Corporal White and he thinks something bad happened. Alternatively, one can follow Hector during the day, where they will find him stealing water from the North cistern. Hector blames it on Anderson, and a new objective to interrogate Anderson appears. Find Anderson and confront him to finish the quest by doing one of the following:

NOTE: Helping to keep Westside's water secret will open up dialogue allowing one to extort a portion of the co-op's profits (10% of earnings, or 20% with a 50 Barter skill), paid by Clayton Ettienne in the Co-op. There will be 250-400 caps every 24 hours; however, finishing the quest and speaking to Boyd will end this arrangement. Trent still complains about the water shortage and talks about leaving.

No matter which option is chosen, Boyd will reward the Courier with the key to the MP confiscated goods trunk, located across from Boyd's office in the jail. In the trunk will be magazines, a super stimpak, doctor bags, mentats and possibly antivenom.

This quest contains a few references to the 1974 film Chinatown. Like the movie, the mystery involves water, which is also referenced in the quest's title. A character present in the quest named Romanowski is a portmanteau of the name Roman Polanski, the director of Chinatown.

Retrieved from "https://fallout.fandom.com/wiki/The_White_Wash?oldid=3325810"
Community content is available under CC-BY-SA unless otherwise noted.