The Way Life Should Be 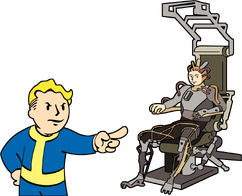 The Way Life Should Be

Complete The Way Life Should Be

The Way Life Should Be is a main quest and achievement/trophy in the Fallout 4 add-on Far Harbor.

The quest begins shortly after entering the Vim! Pop factory after obtaining DiMA's memory #1 during Best Left Forgotten. Enter the main factory and battle through the super mutants to find a security door on the lowermost floors. Inspect the terminal to open the security door and take the elevator to DiMA's secret medical facility.

Inside the facility is an unmarked grave. Exhume it to find the body of the real Captain Avery. Take Avery's skull, locket and the holotape What's Done is Done as evidence of DiMA's crime.

Before leaving, if Nick Valentine is the active companion, he can be used to fool KYE 1.1, the security program for the facility, into thinking he is DiMA, granting access to an additional room, filled with medical junk items and the legendary combat rifle December's Child. If Nick is not present, a medium Charisma check can be used to get access into the medical room.

At this point, three choices are available:

Return to Acadia and confront DiMA with the evidence of synth replacement. After reading the memory he had removed, he remembers all of the guilt he felt at the decision. He pleads to the Sole Survivor to conceal this information from Far Harbor, concluding that revealing the truth will enrage them to the point where they will raze Acadia as a whole for DiMA's crime. Either agree to keep his secret, which leads to Reformation and the conclusion of the quest, or convince him to turn himself in to Far Harbor's justice. If DiMA's secret is kept, he will give the player character the legendary synth chestpiece Acadia's Shield.

If one elects to bring their findings to Kasumi Nakano before talking to DiMA, she is distraught to learn what DiMA has been hiding and wonders if Acadia is worth preserving. Regardless of the Sole Survivor's answer, she is resolved to see this through to the end. Unless "Acadia will burn" is selected, she will provide a reward of 3 stimpaks, 3 RadAway and 3 Stealth Boys. If "Acadia will burn" is selected she will become irate and refuse to speak any further.

If DiMA is convinced to stand trial in Far Harbor, Allen Lee will attempt to incite the entire town against Acadia, fulfilling DiMA's worst fears. It is possible to persuade them to stand down and only exact justice upon DiMA, by either telling Allen to "shut up" or pleading that Acadia is innocent. A number of citizens can and will speak at this point:

If successful, Acadia is spared, DiMA is executed, and the quest concludes.

If unsuccessful, Allen executes DiMA, Brooks is killed as well and most of the town will immediately march on Acadia and execute all of the inhabitants, including Kasumi. One has the option to refuse to take part in the attack, but the synths will still be hostile and will attack if the Sole Survivor is close enough. All of the named Far Harbor residents are essential, so the attack will always succeed. Regardless of one's participation, Allen will give the player character Lucky Eddy when all the synths are dead. Additionally, the perk Destroyer of Acadia will be granted, which grants a 4x damage boost upon dropping to 20% health.

Return to Far Harbor and present Avery's skull and locket to Allen Lee. He will want the skull examined by Teddy Wright to confirm it is that of the original Avery.

Taking the skull to Teddy will confirm that it is Avery's skull and he will ask what the Sole Survivor intends to do. He elects to keep quiet about it and let the player character decide, however he cautions against bringing it to Allen. Taking this confirmation back to Allen results in him assembling a lynch mob to assault Acadia and claim DiMA's head. The end result is the same as putting DiMA on trial and failing to convince Far Harbor to stand down, except DiMA will be at Acadia making his last stand with the other synths.

If one presents this evidence to the synth Avery, she will come to realize the truth that her own mind has been altered to sell the deception. She remains determined to keep the peace on the island and pleads for the Sole Survivor to not tell Allen the truth. She can be extorted for 1300 caps or told upfront that her secret will be kept.

If one has failed to prevent Allen from assembling his lynch mob, Acadia's fate is sealed. Either join in the violence or simply watch. Regardless, Acadia is destroyed and the quest concludes.

While confronting DiMA about Avery's murder, DiMA's recovered memories lead him to the conclusion that replacing High Confessor Tektus is the best option for peace while avoiding bloodshed. Agreeing to this option completes this quest and leads to the quest Reformation. Evidence for the other options is removed from the Sole Survivor's possession in this route.

"The Way Life Should Be" is a tourism slogan used by the state of Maine, where Far Harbor's real-life analog is located; it appears on many of the signs marking the border as one drives in from New Hampshire.

Retrieved from "https://fallout.fandom.com/wiki/The_Way_Life_Should_Be?oldid=3486837"
Community content is available under CC-BY-SA unless otherwise noted.