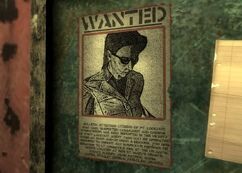 “How eager the Americans are to believe that a great mind of the People would defect!”— Contact tape

The Velvet Curtain is a side quest in the Fallout 3 add-on Point Lookout.

The quest leads the Lone Wanderer to find the whereabouts of missing Chinese agent Wan Yang, and use the Submarine self-destruct codes in her possession to blow up the stranded Chinese submarine SSN-37-1A.

There are several ways to start this quest:

Obtain the orders from the locked locker

Once at the locker (located on the right side of the boardwalk coming from the ferry), open it and take the holotape Box 1207 - Spy's audio password. If the terminal in the motel room or the one in the Detention Camp was not read, this will activate the quest. The holotape instructs the Lone Wanderer to go to the bank and use the password on the tape. It also informs them that the safety deposit boxes can only be accessed by the owners' voices.

At the People's Bank of Point Lookout, go to the safety deposit box room and stand in front of the speaker. Activate the holotape received from the locker. The speaker will say "Processing... processing... Safety deposit access granted" upon which box 1207 will open. Pick up the holotape Espionage debriefing. This tape informs you of Agent Jiang's mission to destroy a captured Chinese submarine and his search for another agent, Agent Yang.

Agent Yang has the codes to destroy the sub within a false molar. The molar, unsurprisingly, is in her head. Exit the bank, turn right and a few steps eastward will have the Lone Wanderer at the Naval Recruiting Center, which is just beyond the walled bumper car arena. Go through the door behind the counter on the left and activate the DiA Officer's terminal. Access the file "Field Report - Yang Capture/Transfer". Read it to learn the fate of Yang being captured by U.S. officials and detained at Turtledove Detention Camp. Before leaving the room, don't miss the mini nuke on the table next to the computer and the moonshine on the floor next to the safe.

Turtledove is directly north from the Recruitment Center. The camp is devoid of swampfolk, but swarming with defense robots and ghouls. Enter the morgue through the cellar door, open Yang's remains locker and take the submarine self-destruct codes. Escape the morgue the way it was entered (through the cellar door), or use the hatch located near the cremation chamber, which leads to the septic tunnel. In the tunnel, exit to the east of the Turtledove Detention Camp, in the swamps.

Also, the septic tunnel might be a good way to enter the morgue without fighting a large number of ghouls and sentry bots - investigate the area to the southwest of Turtledove Detention Camp, two or three squares away, while periodically checking the Pip-Boy's local map (as the entrance is not displayed at the world map) near the trash heap. At the entrance to the septic tunnel are 2 first aid boxes, 2 ammunition boxes with some shotgun shells, and a yellow maintenance barrier.

Blow up the Chinese submarine

The Chinese spy sub is beached underwater, located south of the Calvert Mansion and near a pair of sunken vessels just west of the lighthouse. Enter the sub through a hatch on the conning tower. Use the terminal in the bow to activate the self-destruct, and flip the failsafe switch in the stern. Before flipping the switch, use Lockpick on a footlocker, which contains several valuable items, including a power fist. The Lone Wanderer will have about 10 seconds to escape after leaving the sub, but until they do leave, nothing will happen.

Not too far from the sub site is a ship far enough away from the blast radius that it can be used as a position to observe the explosion in safety, although it may still be somewhat difficult to see the underwater explosion due to the murky water.

Return to the motel

Head back to the motel, and receive some new orders from the safehouse terminal. The next objective is to meet the head Chinese agent at his bunker, located beside Calvert Mansion, underneath the atrium. The terminal directs the Lone Wanderer to a pair of cryptochromatic spectacles hidden within the toilet tank in the motel.

Head to the bunker

Travel to the Calvert Mansion and enter the remnants of an aviary to the west. Equip the cryptographic spectacles now. The number of rings on each vase represents its number. Using the cryptochromatic sequence activate the vases. The sequence is: 1, 3, 2, 3, 4, 4, 2. A hatch will appear on the floor next to the #2 vase. If entered correctly an audible "5-ping" noise instead of the normal "click" can be heard. If the hatch does not open, enter the code a second time immediately after, ignoring the 'wrong' sound effect, after entering the code a second time, the Chinese Intelligence bunker should open.

Inside the bunker is a large number of weapons and ammunition and a workbench. The Lone Wanderer will be approached by a protectron who asks them to leave the hazardous area. Choose to give the robot the pass phrase or tell the "tin man" to get out of the way. There are no benefits or drawbacks to either option save personal preference on where the robot should stand once the quest is complete (assuming it isn't destroyed).

Regardless of the decision, don't go right away. There are numerous crates with various types of ammunition, and a Stealth Boy next to the door that was used to come in. There is also a Stealth Boy and mini nuke on the shelf next to the doorway the protectron either leads the player character through (pass phrase given), or it guards (tin man option given).

Enter the room, and pick up the Backwater rifle on the shelf next to the door, then activate the terminal. The terminal tells the Lone Wanderer the funds for completing the mission have been wired to their next of kin and advises them to take their death honorably. The terminal will then seal the chamber, and fill it with radiation. There are two methods of escape, and one option to buy some time.

Entering the run-off tunnel or escaping through the door will complete the quest.

Retrieved from "https://fallout.fandom.com/wiki/The_Velvet_Curtain?oldid=3244361"
Community content is available under CC-BY-SA unless otherwise noted.