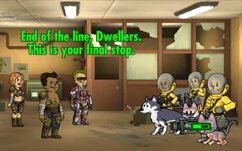 “That Deathclaw steak was a bit...stringy, to say the least. The chef feels bad about this, and wants to make his favorite comfort food, lasagna. Unfortunately, raiders have stolen his secret sauce recipe, and we need to get it back from their towering lair first.”

The Towering Il Forno is an overseer quest and the part of the Food, Glowrious Food multi-stage questline in Fallout Shelter.

The building is, as the name suggests, quite high (12 floors) with many rooms. Not all of the rooms are occupied. You will find a fair share of raiders though, their bosses using grenades, with molerats including broodmothers making an appearance as well. On the fifth floor (sixth from the bottom from the basement) you will encounter a pair of radscorpions, while a few deathclaws lurk on the upper floors.

The first three objectives are to eliminate the raiders. The groups will engage in a conversation. The answer doesn't matter, you will always have to fight them. Kill the last boss and the recipe's yours.

You will rely on healing with Stimpacks, so bring plenty, although there is also a decent amount to be found in the various rooms. There are no radioactive enemies though, so RadAway is not needed.

Rewards
Add a photo to this gallery
Retrieved from "https://fallout.fandom.com/wiki/The_Towering_Il_Forno?oldid=3263026"
Community content is available under CC-BY-SA unless otherwise noted.