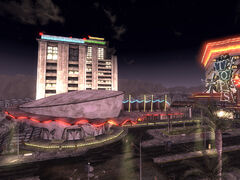 The Tops during the night

“That news was brought to you by the Tops Casino. You'll dig us, baby! We're the Tops!”— Mr. New Vegas, Fallout: New Vegas

Opening alongside the Ultra-Luxe, The Tops quickly became a centerpiece of the Strip before the War.[1] It was well known for its comprehensive coverage of all of its patron's needs, offering great accommodations, dancing, drinks and plenty of gambling,[2] though one of its most prominent features was the Aces Theater, constantly attracting fresh talent to entertain its patrons.[3]

After the Great War, the casino was abandoned. Spared nuclear devastation, it remained empty for two centuries. Things changed in 2274 when House detected the first NCR forces at Hoover Dam. The Lucky 38 opened and securitrons deployed to the city en masse. The tribes were offered a choice: Extermination, resettlement or working for House.[4] The future Chairmen, the Boot Riders, were approached east of Vegas by a Securitron. After initial miscommunication (and the deployment of twenty more), they listened to what House had to offer. That included food, shelter, and medical services. Most of the tribe was against the deal. Benny was all for it.[5] Bingo, the tribe chief, challenged Benny to a knife fight over their disagreement as to the course the tribe should take. The fight took place three days after House made contact. Benny emerged victoriously.[6]

The tribe moved to Vegas and began renovating the Tops, bringing it back to life. As they worked, a number of House's Securitrons dropped off boxes with suits, ties, and wingtip shoes, together with a message from their employer announcing they were the Chairmen now. The tribe hated the name, but Benny overrode their decision. As he put it, it was "ciao to the old ways and time to swing in style."[7][8] By 2281, the Tops returned to its role as the mainstay of the Strip, offering everything one could desire and teaching its patrons how to truly enjoy the finer aspects of life.[9] A true classic Vegas experience, with cool, hip, fun and macho posturing to entice those with a sense of style.[10] Most importantly, the legendary Aces Theater was brought back to life by Tommy Torini, giving a venue for talents from all over the wasteland to perform.[11]

But the Tops was not enough for Benny. Although he was groomed as a protege by Mr. House, he did not share his employer's views on Vegas. He saw the city as a potential for independent power, not answering to the NCR, the Legion or House.[12] The Tops became his stronghold, where he planned how to overthrow Mr. House, protected by the contract which expressly forbade Securitrons from entering the premises without invitation or probable cause.[13] To this end, he hijacked a Securitron and set up a workshop in one of the suites on the 13th floor, where he and Emily Ortal conceived Yes Man, a covert tap into House's vast electronic network. Now all that was needed was the right opportunity.[14]

The Tops is a casino right out of Vegas's rat-pack era. Frank Sinatra's music plays softly in the background to the clinks of slot machines. Security is tight, with Chairmen out front to collect patrons' weapons before they step inside. The weapons will be automatically returned to the player character's inventory when they leave and the player character has the option to hide holdout weapons if they can pass the required Sneak check.

There are six main areas with loading screens between them: the casino, restaurant, Aces theater, presidential suite, 13th floor, and the courtyard. 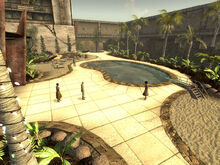 Beyond Benny's workshop is a hallway with an elevator used by Benny as an emergency escape route. The elevator requires a key to access, but there is no key that opens it in the game.

With Benny unable to reach it to trigger the re-locking portion of the script, the Courier can go down and explore. Tricking the script in this way is the only way to gain access to the sub-basement on a console. On the PC version, one can simply use the "unlock" console command to unlock the door. The sub-basement itself is a small room with a breached wall leading into a sealed-off section of Vault 21. It contains some minor loot in lockers and several explosives crates.

If one explores the unfinished vault, they will find several inaccessible doors, but there is one door at the end of a corridor that, if opened with the console command "unlock," will lead to a void. If one jumps inside the void they will be teleported to the real Vault 21. Then they can simply turn around and leave to New Vegas or explore the vault. 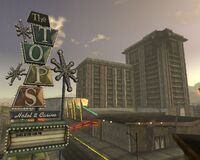 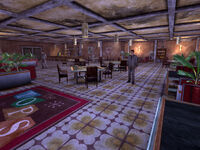 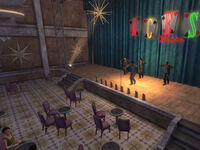 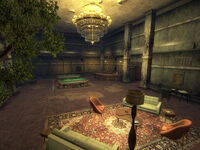 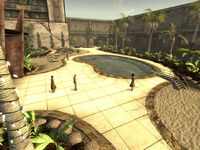 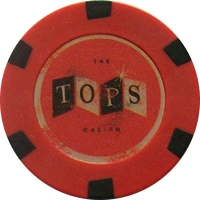 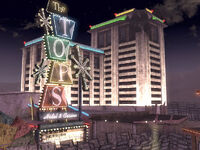 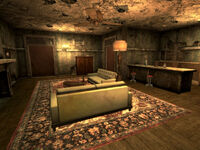 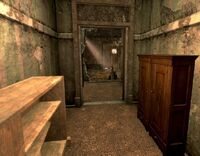 Retrieved from "https://fallout.fandom.com/wiki/The_Tops?oldid=3322575"
Community content is available under CC-BY-SA unless otherwise noted.