Fallout: New Vegas
“I've heard people passing through mention some kind of underground fights pitting creatures of the waste against one another for sport. And when I say "underground", that's their word I'm using, not my own.”— Rotface

The Thorn is an underground arena located by the Westside south entrance in 2281.

When approaching the Westside south entrance, a barricade of sorts can be seen, spelling out the location's name. The "R" in the sign points to the sewer below, distinguishing the main entrance. The Thorn serves as a sporting arena, where bets can be placed on the outcome of fights between wasteland creatures. Access to the Thorn is denied from 1:00 AM to 6:00 AM. The arena is surrounded by a system of raised catwalks for the guards and spectators, and surrounding the sides are cages holding the wasteland creatures grown and kept by Red Lucy for arena battles.

Custom fights can be arranged by speaking to Red Lucy. The player chooses what creature and how many of such will fight on each side. Since the creatures are expensive to breed, keep, and maintain, the player must pay for the fight. If the team chosen by the Courier is victorious, the amount of caps originally given will be returned as well as an additional sum.

It is also possible to participate in the bouts. The creatures available to fight are fire geckos, giant mantises, radscorpions, night stalkers, cazadores and deathclaws, and the number of creatures is determined by the player. The screen will fade to black to enter the arena. The winnings are dependent on which and how many creatures are fought. The most the Courier can fight is three deathclaws at once. The player must bring Red Lucy several eggs of the animal they wish to fight before they can fight them in the arena, to replenish her creature inventory.

The Thorn appears only in Fallout: New Vegas.

One of the Thorn guard's lines "We're watching you...

ssstranger." is a reference to a common voice line spoken by the Ordinators in the video game The Elder Scrolls III: Morrowind - "We're watching you... 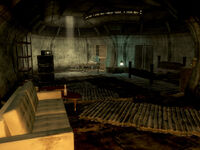 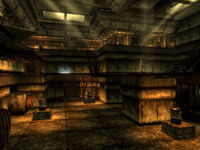 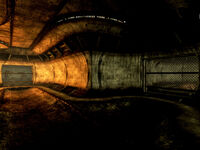