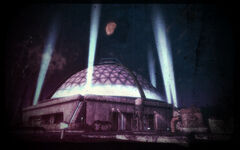 “The nucleus of this research was the Dome, a huge stone facility that held the labs of every science known to man. It was a think tank where no problem could not be solved, where no question could not be answered.”— Doctor Mobius, Old World Blues intro

The Think Tank is a location in the Big MT in 2281. The building itself is in the shape of a dome, surrounded with bright upward-facing bluish-colored projectors. It contains the residence of the five Big MT scientists, as well as the former apartment of Dr. Mobius, known as the Sink.

Upon entry into a room with an elevator to the Sink, there is a hallway to the central dome. Inside the central dome, there are two sets of stairs on each side which lead to the rooms where the six scientists slept before they became think tanks.

Just outside of the Think Tank and in the front are two fenced-in areas, the one to the right houses what seems to be sensor arrays or some sort of radar towers. The one on the left, houses what looks like small silos, possibly holding water or other liquids inside. To the right, past the sensor arrays and down the pavement (and taking a right on the pavement, as if continuing on the path straight, there is a destroyed facility with no name, location or entrance), there is the X-12 research center, which is a small facility by a few large pipes. From here, following the path down (or north on the compass) is a number of lobotomites, whom, (depending on the player character's level) will wield various weapons. Farther along the path are three large radar towers fenced in to the right, along with two large buildings on the left with no real entrance; however, the second building down has a stairway up on its second floor, where several vending machines and metal boxes are located.

On the left, there is a large green metal pipe that leads to what appears to be a bridge, where one or more night stalkers can spawn along with several lobotomites. Farther down the pathway is a large intersection of pipes trailing towards different directions and two large satellite dishes. Next to the second satellite dish, several lobotomites will spawn, armed with various weaponry. Following the large red pipe down leads to the back area of the Think Tank, which holds what appears to be two grain silos, three barracks with pipes installed into them, and five smokestacks. There are various footlockers, electrical boxes, and metal boxes. Lobotomites have a chance to spawn here as well, next to the barracks.

David Lieu created the tileset and handled the propping and lighting in the location.[1]

At the top, The Sink balcony