The Synthetic Truth is a paper note in Fallout 4. It is one of several articles published by Publick Occurrences.

Noodles. We all eat them. We all love them. And Diamond City's Power Noodles has supplied this sustenance for the past fifteen years. From the stilted mechanical cadence of Takahashi's programmed Japanese, to the fragrant steam that wafts from each bowl, to the scalding tang of each delicious mouthful - the ordering and eating of noodles is but one of many shared human experiences. Or is it?

I was struck by this very question as I sat at the counter of Power Noodles last Wednesday night, just after 5:00 pm, enjoying a dinner I had so many times before. That's when I noticed our very own Mayor McDonough sidle up to a stool, and engage in the very same ritual. Right hand extending. Mouth opening. Teeth chewing. Yes, eating noodles. The shared experience of almost every Diamond City resident.

So it must have also seemed to the residents of Diamond City nearly sixty years ago, on an uncharacteristically warm May evening in 2229, as they sat around this very same counter. But that was before the days of Takahashi and his noodles, when the bar served not noodles, but ice cold Nuka-Colas, frothy beers, and stiff shots of whiskey. The barman's name was Henry, and that night, he facilitated the shared human experiences of drinking, smoking, talking and laughing. That is, until tragedy struck.

There aren't many among us who are even old enough to remember that evening - although some of the city's Ghoul residents certainly could have, had they not been forcibly removed, thanks to Mayor McDonough's anti-Ghoul decree of 2282. But there is one person among us who does remember, distinctly, the events of that evening: respected matriarch Eustace Hawthorne, who recounted her story in a Publick Occurrences exclusive interview.

"Oh, I was there all right. Sitting right at the bar, sure as you're sitting in front of me now. Twenty-two years old or so, and just looking to have a good time. I was safe behind the Wall - we all were - so what was the harm? And let me tell you, that Mr. Carter made it easy. He came into town earlier that day, said he was from out west somewhere. It didn't really matter. What did matter was his smile, and his laugh, and the way he'd make everyone feel at ease. That night, at the bar, we all just sort of crowded around him. Everyone wanted to exchange a word, or hear about the state of the Commonwealth. And Mr. Carter, he was all too happy to oblige. It was just so wonderful. Until it wasn't."

Eustace continued her account of that evening, and the moment when things turned sinister, and the truth about Mr. Carter was revealed.

"We'd been drinking, and carrying on, must have been three hours. Mr. Carter had four or five drinks in that time. He seemed a bit drunk, I guess, like the rest of us. Then something just sort of happened. He was smiling, but the smile sort of went from his face, all in an instant. And then his cheek started twitching, kind of funny. And I remember watching him, clear as if it happened just yesterday. He reached inside his coat, took out a revolver, and then 'Blam!' - He shot Henry, the barman, right in the head. Didn't hesitate, didn't show any emotion - Mr. Carter killed Henry as casually as if he were paying him for a drink. But his cheek never did stop twitching. Let me tell you, all Hell broke loose after that."

What Eustace is describing is, of course, is the infamous event known as the "Broken Mask," when the people of the Commonwealth learned for the first time that the Institute, the shadowy scientific organization responsible for the creation of combat androids, had actually succeeded in creating a model so advanced, it could effortlessly infiltrate human society. Unbeknownst to the people of Diamond City, the Institute had somehow evolved their androids into true synthetic humans. Synths.

"After he shot Henry, that Mr. Carter shot three or four other people, too. Like I said, all Hell broke loose. The guards came running, they opened fire, and Mr. Carter he kept shooting, and throwing people around left and right. Finally, those guards put him down. Seemed like they had killed a man who had flipped his lid. Gone crazy. And he lay there like a dead crazy man, sure enough. God, it was horrible. But then we saw the plastic and the metal - this was one of them early synths, you see - and we realized it wasn't a man at all. It was then we all knew. The Institute wasn't just 'out there.' The Institute was everywhere now. Among us."

It was never determined precisely why the synth known as Mr. Carter went on his killing spree. Some suggested he had somehow been remotely controlled by the Institute, who wanted to test his combat effectiveness. Still others felt he had simply malfunctioned (a hypothesis supported by the twitching cheek), and was never meant to kill anyone. But at that time, the "why" hardly seemed important. What mattered was that the humans of the Commonwealth had been truly infiltrated by an organization whose intentions and motives were, and still are, a complete mystery - using a model of synth even less advanced than the ones the Institute has in service today.

Which brings us to noodles. Specifically, the noodles consumed by Mayor McDonough last Wednesday night, in the same spot that Mr. Carter the synth went haywire, and mercilessly killed several people - after spending hours sharing an experience the people of Diamond City assumed was reserved for members of the human race. They were wrong.

Nine copies in a news stand west of Monsignor Plaza 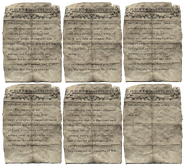