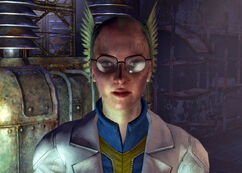 One of the female appearances 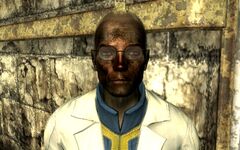 The Surgeon is a hostile mad scientist whose headquarters is located in the CEO offices of the Red Racer factory in 2277.

A scientist that is hostile to most all who interrupt the experiments they are engaged in. The Surgeon's mind-controlling experiments seem to seek an understanding of the brain patterns of ghouls and super mutants. Fiddling with brains is a mission for the Surgeon, and the good doctor's main test-subject is one of the glowing ones now known only as "Stefan." Stefan is evidence of the Surgeon's trepanning prowess.

The Surgeon has been experimenting with mind control by implanting chips into multiple ghouls and super mutants inside the factory.[1]

The Surgeon appears only in Fallout 3.

Retrieved from "https://fallout.fandom.com/wiki/The_Surgeon?oldid=3256614"
Community content is available under CC-BY-SA unless otherwise noted.