Play sound
Metallic Monks.ogg
“You have entered a restricted area! Exit the gate area or you will be fired upon!”

The Strip North Gate is a location in the Mojave Wasteland in 2281. It is one of only two ways to enter the Strip. The only other way to gain access is via the Las Vegas Boulevard Station. However, the Courier will need to have at least a "Liked" reputation by the NCR to enter through the LVB station.

The entrance to the Strip is located in the southwest section of Freeside. The area in front of the gate is guarded by five PDQ-88b securitron gatekeepers, which only grant access to those who are able to pass the credit check of 2,000 caps or passport owners. Note this does not actually require payment of 2,000 caps, just having the 2,000 caps in the inventory.

The Courier also has the option to gain access by passing an 80 Science check. Alternatively, it is possible to obtain a passport from Ralph, who will sell a fake passport after a Speech check along with a payment of 500 caps, or 375 with a Barter check.

Upon first approaching the entrance, Old Ben warns the Courier to not recklessly run to the gate without first talking to the greeter stationed there. True to his warning, a squatter attempts to run past the securitrons and is killed.

The Strip North Gate appears only in Fallout: New Vegas.

Pre-release screenshot of the Strip's entrance 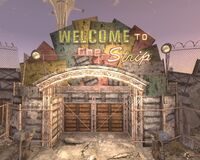 Entrance to the Strip at dusk