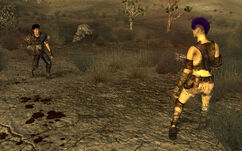 Between Nipton and the Nipton Road Pit Stop

“What? This? He stole this from me at gunpoint. Lucky for me, he got distracted and I got a chance to draw on him. It's a, uh, necklace that I made out of these special caps. You ever see any caps with a blue star on them like these?”— Jacklyn

The Star Showdown is an unmarked quest in Fallout: New Vegas.

Located just outside the west exit of Nipton, following the road that heads west towards the NCR Mojave Outpost, one can see two individuals shooting at each other. The characters in question are named Tomas and Jacklyn and will continue to fight each other until one of them is dead. They cannot be interacted with until they have finished fighting, however, Jacklyn will shout out to the player character for help. The Courier can kill either character, but killing Tomas at this point affects Karma negatively.

Once either Tomas or Jacklyn has been killed, the other will approach the Courier and initiate conversation.

Upon entering the area Jacklyn and Tomas will engage in a gunfight with one another, and the player character can intervene or wait until one of them wins the fight.

If Jacklyn dies, Tomas will approach the player character and initiate a conversation. Through certain dialogue options, one can learn about what happened and achieve one of the following outcomes:

If one of the latter two options is chosen, the Courier can then kill or pickpocket Tomas to claim his 7 Sunset Sarsaparilla star bottle caps. Killing Tomas will incur bad Karma unless he was made hostile through dialogue.

If Tomas dies, Jacklyn will approach the player character after interacting with Tomas' body and initiate conversation. Through certain dialogue options, she will give her a description of events and achieve one of the following outcomes:

The Courier can choose to pickpocket Jacklyn for the Sunset Sarsaparilla star bottle caps, incurring in a loss of Karma. One can, however, kill her at any time with no Karma loss, even after the gunfight or before speaking to her. After she loots Tomas' body, she will have 9 Sunset Sarsaparilla star bottle caps, otherwise, she will have only 2, the other 7 will still be with Tomas.

Retrieved from "https://fallout.fandom.com/wiki/The_Star_Showdown?oldid=3261871"
Community content is available under CC-BY-SA unless otherwise noted.
... more about "The Star Showdown"
RDF feed
Has platform
PC +, Xbox 360 +  and Playstation 3 +